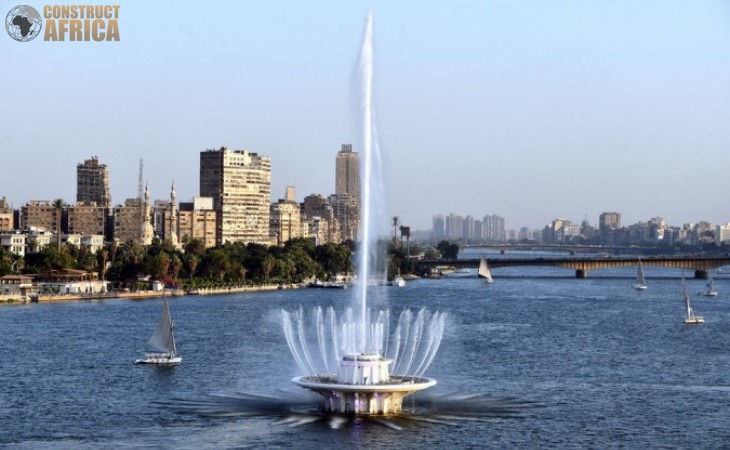 A crown of water formed by a circle of vertical jets reaches high into the air, brilliant white against the midnight blue of the sky. Around it, a second ring of water plays, spiraling clockwise then counterclockwise, rising and falling in a graceful ballet. And, as the glistening columns and curtains dance, their color changes: now cerise, now electric blue, now mauve.

This is the Nile River Fountain, one of modern Egypt's great landmarks, rejuvenated after decades of neglect.

"Long live Egypt!" exclaims government media advisor Hany Youness after watching the reopening ceremony. "The fountain has been out of service for 40 years but is now a luminous beacon at the heart of the nation."

As the Nile nears the end of its 6,000 kilometer journey to the sea, it slows and divides. A complex mesh of branches part company and rejoin around small islands. At the start of this delta stands Cairo: a teeming city of 20 million people, with a history stretching back to the dawn of civilization.

In the conurbation's midst, where the great river parts around Gezira Island, the Nile is half a kilometer wide. And the River Fountain stands at the center of this great expanse of quiet, dark water. It was built in the 1950s by German engineers as part of President Nasser's ambitious plans to energize and modernize Egypt. By the 1980s, however, it had fallen into disrepair, a victim of political and economic turmoil.

Forty years later, with Egypt once more committed to a major program of public works, the Arab Contractors Company was given the brief of bringing the fountain back to life. That was no small undertaking. The fountain is 300 meters from the onshore control station, via which all the power cables and control cables had to be routed. And that's a lot of heavy-duty hardware: the fountain's central element is nine meters in diameter, with jets that can propel the water 100 meters upward. Surrounding it is a lower, wider ring of 32 adjustable jets, each with its own underwater spotlight. In short, the fountain is a complex and power-hungry system that requires major infrastructural support. A new pipeline, therefore, had to be installed from the densely developed Gezira Island, under the river and out to the midstream fountain site.

"We laid the pipeline by bringing a Vermeer D130X150 horizontal directional drill into the grounds of the island's Sofitel El Gezirah Hotel," explains Mostafa Kamal from drilling contractor Prodrill. "That's where the fountain's control room is located. It was important to have a good-sized drill that had sufficient traction to pull the pipes over the relevant distance. The D130X150 fitted the bill because of its high torque, onboard pump and crane attachment."

With its compact footprint, the Vermeer drill was ideal for use in the close confines of the hotel. In transport-ready form, the machine measures only about 10 meters by 2.5 meters and stands roughly 3.3 meters tall. But lean dimensions don't come at the expense of raw drilling muscle. The D130x150 delivers nearly 200 kilowatts of power and has the torque, pullback force and other features needed for demanding drilling projects.

"Of course, because the contractors were working inside a hotel, it was very important to get the job done quickly and efficiently," says Mohamed Saied, who was closely involved with the project as an engineer working for ’the local Vermeer dealership. “So it was a big plus that the D130x150 has an operator-controlled rod loader. That eliminates the labor involved in manually loading and unloading drill rods. The three-speed gearbox improves drilling efficiency as well, by letting the operator adjust the rotational torque to match different ground conditions."

While the D130x150 was ideal for the particular challenges presented by the Nile River Fountain project, other drilling projects have other requirements. A couple of hours drive to the south of Cairo lies Beni Suef, a city of about 250,000 people, and an important center for textiles manufacturing. Like Cairo, Beni Suef straddles the Nile and anything that needs to be moved from east to west, or vice versa, has several hundred meters of water to negotiate.

When the decision was taken to install a product pipeline just to the north of the city, the civil engineering company operated by Ashraf Kanfoud secured the contract to route the 406 millimeters of steel pipe beneath the river. The gauge of the pipe and the distance to be traversed – 1,800 meters in total – meant that the job required a substantially bigger drill than the one used for the fountain. The Kanfoud Company opted for a Vermeer D1000X900 horizontal directional drill. With dominating twin Caterpillar C-27 engines producing nearly 125,000 Nm of rotational torque and 4,500 kN of thrust/pullback, the rig is suited to major
projects like the Beni Suef pipeline.

"A project of this size is always a team effort," says Ashraf. "A large number of people contributed to its success. But none more so than the team at the Vermeer Egyptian agency, led by Mohamed Saied. The support we received from Mohamed and his colleagues was vital. Our drill operators didn't need any training this time around, because Vermeer provided that for a previous project. But Vermeer gave us advice on how to use the drill's capabilities to maximum advantage, plus comprehensive service-side support."

Although the Kanfoud Company already owned a sizeable fleet of Vermeer drills, a D1000X900 was acquired for Beni Suef. "It's a major investment, of course," Mohamed acknowledges, "But there are huge commercial opportunities for an enterprise that's able to take on projects of this scale. The payback horizon is a lot shorter than you might think."

For Kanfoud, one of the main attractions of the D1000X900 was its high-torque, low-speed Hagglunds hydraulic motors that power the rotary and carriage drives. The arrangement means that the company can run the drill at full torque and full rotary speed simultaneously. "In simple terms, what that means is that it can get the job done quickly," explains Mohamed. "When you hit a resistant patch of ground, you don't need to back off the rotary speed in order to maintain the torque. You push on through."

Another feature of the D1000x900 that recommended it for the pipeline project was its floating vise. By allowing the full rod upset to be clamped during breakout of the lower and upper joints, fewer stoppages are needed, which helps maximize productivity.

"I always like to tell our clients – mainly engineering contractors like Kanfoud – that the Vermeer range of drills is second to none in terms of its breadth," reflects Mohamed. "I'm able to say that to them sincerely as a fellow engineer, not as a salesman. Whatever the project is – whether that's a big pipeline installation like Beni Suef or something like the Nile River Fountain, where you need maximum punch from a compact unit – we can offer them a drill that's right for the job. Plus, the backing of an expert team, based right here in Egypt. Every time I see the Nile River Fountain dancing, I'm reminded of the vital role our machinery plays in every sphere of life."

Article provided by Signature Style on behalf of Vermeer Corporation

This article contains third-party observations, advice or experiences that do not necessarily reflect the opinions of Vermeer Corporation, its affiliates or its dealers. Testimonials and/or endorsements by customers in specific circumstances may not be representative of normal circumstances experienced by all customers.

Vermeer Corporation reserves the right to make changes in engineering, design and specifications; add improvements; or discontinue manufacturing at any time without notice or obligation.
Equipment shown is for illustrative purposes only and may display optional accessories or components specific to their global region.
Please contact your local Vermeer dealer for more information on machine specifications.