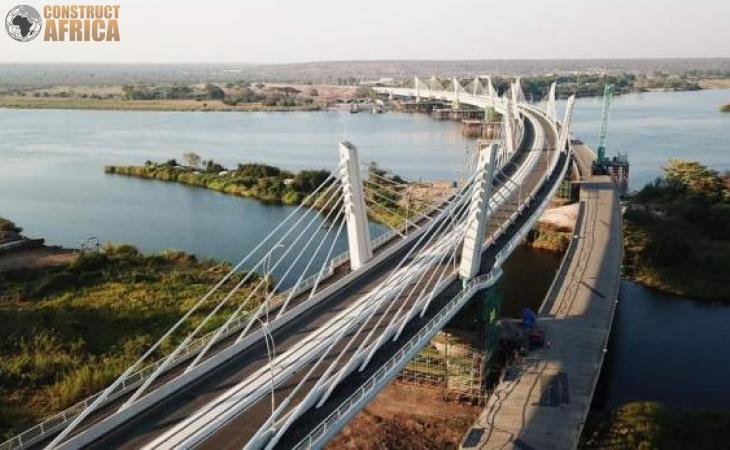 Zambia and Botswana have commissioned the newly constructed Kazungula road and rail bridge linking both countries across the Zambezi river.

The Kazungula Bridge construction project is reported to have cost US$259.3 million, and includes international border facilities in Zambia and Botswana.

The 923-metre-long by 18.5-metre-wide bridge has a longest span of 129 metres and links the town of Kazungula in Zambia with Botswana. The bridge is curved to avoid the border area in the Zambezi waters between Botswana and Zimbabwe, and features a single-line railway track between two traffic lanes and pavements for pedestrians.

According to a press release by the Botswana government, “The bridge and its associated works is expected to ease access to international markets through connectivity with major seaports as well as contribute to maximizing the operational efficiency of the SADC north-south corridor and enhance regional economic integration.”

The bridge will provide a transport corridor from the port of Durban in South Africa right up to Dar es Salaam in Tanzania. In particular, the new Kazungula bridge will allow trucks to bypass the perennially congested Beitbridge border post between Zimbabwe and South Africa, where vehicles typically spend hours and sometimes days queueing to cross.

The Botswana government posted a video of the Kazungula Bridge project on their Facebook page (see below).

According to the project profile described in the press release of the Botswana government, the Kazungula bridge project consisted of three components - Package 1, Package 2 and Package 3 respectively.

Package 1 is the bridge, which is designed as an extra-dosed road-rail bridge to accommodate a future railway line which will link Mosetse-Kazungula in Botswana to Kazungula-Livingstone in Zambia.

Package 1, construction of the bridge structure across the Zambezi river, was funded by both Governments of Botswana and Zambia on 50%/50% basis. The construction contract for Package 1 was awarded to Daewoo Engineering and Construction at an original sum of US$161,961,304.84 which was revised to US$174,184,799.54 to incorporate a 16% VAT component from the Government of the Republic of Zambia.

Package 2, construction of the Botswana side One Stop Border Post, was funded by JICA exclusive of VAT while the Botswana Government funded the VAT component. The contract was awarded to Zhong Gan Engineering & Construction at a cost of BWP440,116,275.30 (approx. US$41 million).

Package 3, construction of the Zambia side One Stop Border Post, was funded by AfDB (African Development Bank). The contract was awarded to Anhui Foreign Economic Construction Group Co. Ltd at a cost of ZMW263,670,419.98 (approx. US$15 million).

Speaking at the commissioning ceremony for the Kazungula Bridge, Zambian President Edgar Lungu said the bridge was a monumental effort linking Zambia internally and externally to ease the movement of goods and services.

Also speaking during the commissioning ceremony, Botswana President Mokgweetsi Masisi said his country regarded Zambia as a key strategic partner in development, adding the iconic project was a demonstration of the continued growing relations. President Masisi added that the route was historic as it was used as a safe exit during the struggle for independence.

Zambia and the DRC are reported to be in the process of putting up a similar facility on their border.