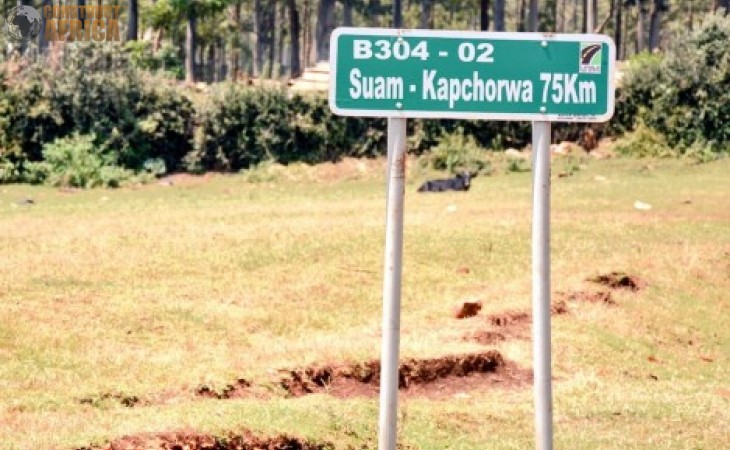 Tarmacking of the Kapchorwa – Suam Road in Uganda linking Kapchorwa District in Uganda to the Kenyan border is on track for completion early this year 2022, following earlier delays.

The 73km stretch of road connecting Kapchorwa, the district capital of Kapchorwa District to Suam, which lies on the Uganda-Kenya border, is currently being tarmacked. The project is set for completion by mid-February 2022.

The project started in August 2018 with a groundbreaking ceremony performed by Ugandan President Yoweri Museveni and Kenyan Vice-President Williams Ruto.

With President Yoweri Museveni during the launch of the Kapchorwa-Suam Road at Kapchorwa, Uganda. pic.twitter.com/DPdJb2zxBI

The road construction works is being carried out by China State Construction Engineering Corporation (CSCEC). The Uganda National Roads Authority (UNRA) is the supervising agency for the project. UNRA is the Uganda government agency responsible for developing and maintaining the country's national roads network, advising the government on general roads policy, and addressing national transport concerns.

The dedication to timely and meticulous construction of this project was emphasized in a meeting on December 10, 2021, between Eng. Samuel Muhoozi, the Director for Roads and Bridges Development at UNRA, and China State Construction Engineering Corporation (CSCEC) officials in Kapchorwa. Legislators from the Uganda Parliament’s Physical Infrastructure Committee were also present at this meeting.

The scope of works for the Kapchorwa – Suam road construction project includes the tarmacking of the entire gravel road starting at Kapchorwa, moving west to Kween, then towards Bukwo and ending at Suam which is on the border of Kenya and Uganda. It also includes the construction of 20km town roads, 10-foot bridges, one border post, 11 high standard bridges, 23 box culverts and 191 pipe culverts.

The cost of this road is estimated to be Ksh10.5 billion (US$105.76 million). The project was originally scheduled to be completed within 36 months, with a targeted completion date of 30 September 2021. However, the project faced delays due to extensive rock excavations which were more than what was anticipated, and abnormal rains. The delays have created a strain on the project funding, which is being provided by African Development Bank and African Development Fund.

Advantages of the Project

On completion, the road will cut the travel time between Kapchorwa and Suam from 4 hours to one and a half hours. It is poised to improve farmers' prospects to market their produce far and wide. It will also provide a boost in trade between Uganda and Kenya.