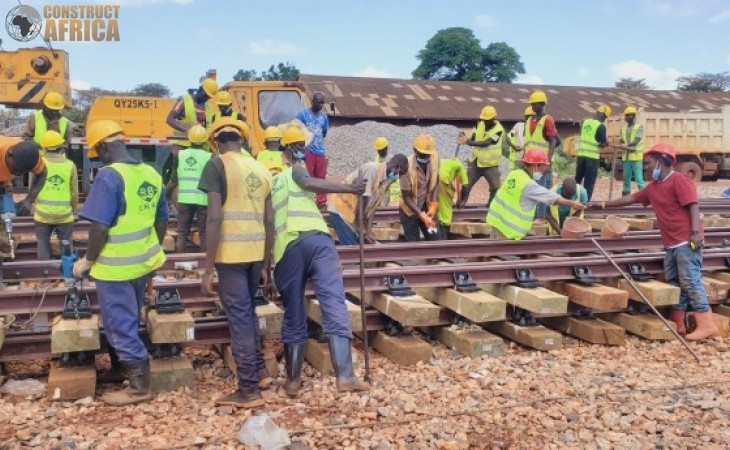 The railway is part of the Northern Corridor of the East African Community linking Kampala to the Port of Mombasa in Kenya.

The scope of work on the project includes the rehabilitation of 265 kilometres of Metre Gauge Railway (MGR) tracks between Malaba and Mukono, covering the rail line to Jinja Pier and Port Bell on Lake Victoria.

The rehabilitation works were reported to be 64% complete in August 2022.

According to the contractor handling the project, Chinese Railway and Bridge Cooperation (CRBC), the rehabilitation of the Kampala-Malaba metre gauge railway line is now almost complete.

Qin Jian, a CRBC engineer working on the project, stated “We have rehabilitated over 200 kilometres and are at 95%. We have fitted everything, including rails, sleepers, and compacted stones. We shall be able to hand over the project in February as planned because the remaining five percent (28 kilometres) is too small. We want to complete the rehabilitation work on time so that the trains can keep moving”.

In 2022, @GovUganda contracted the China Road and Bridge Corporation to rehabilitate the Meter gauge Railway line from Malaba to Mukono in its first phase of revamping rail in Uganda. pic.twitter.com/B74kW4dkiD

The rail line is part of the Northern Corridor of the East African Community linking Kampala in Uganda to the Port of Mombasa in Kenya. The rehabilitation of the line will help boost rail services and lower transportation costs.

The rehabilitation project is being implemented in two phases:

John Sengendo, the Uganda Railways Corporation senior public relations and communication officer, stated that permanent inspectors would be deployed at the newly rehabilitated line along with sensors to detect broken points on rails and curb vandalism.

“Vandalism is not only about taking sleepers or rails but also stones. We are also working with the Uganda People’s Defence Forces and local leaders along the line to see that vandalism stops,” Sengendo said.

He added that passenger hubs would also be constructed, and a sleeper line laid from Mukono to Kampala, Mukono to Kyengera, and Kampala to Port Bell. Installation of diesel multiple units or DMUs will help reduce traffic gridlock.

AfDB president Akinwumi Adesina said: “Railway lines are critical to opening up the heartland of Africa, where there is immense agricultural and economic potential.” Adesina reiterated that the tracks would connect rural-based Special Agricultural Processing Zones to crucial logistics hubs.