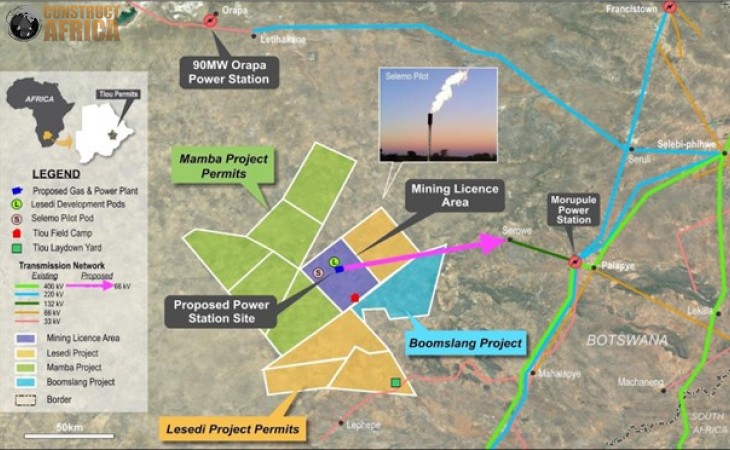 Tlou Energy Ltd has announced the start of construction for this project.

The 100-kilometre, 66-kilovolt (kV) line, able to carry at least 25 megawatts of power and supporting substations, will be required to connect Lesedi Power Plant, Tlou energy's gas field and the proposed generation site to the grid.

Work on the line is to be completed by mid-2023, with electricity sale in the second half of 2023.

Tlou Energy is the owner and developer of the Lesedi 10-megawatt gas fired power facility, located in the Sedibeng District of Gauteng province, South Africa.

“We are firmly on track to becoming a regional power producer in a market with a huge power demand and at a time where worldwide demand for gas and cleaner energy is growing significantly," said Tlou's managing director Tony Gilby.

Lesedi is 100 kilometres from the electricity grid in Botswana. The first development stage for the transmission line project will involve the erection of wooden poles fitted with an overhead 66-kilovolt transmission line, which will supply 25 megawatts of power to the grid. The line will begin at Lesedi and run across flat, arid terrain. The final approximately five kilometres will run along the outskirts of the Serowe township, where the grid connection will occur.

They have also begun equipment procurement, including the manufacturing of steel and wooden poles, cross-arms, line hardware, fittings, stay wire and assemblies. The project site office is at Mogorosi village, and a roving site camp is planned along the transmission line route.

Zismo field office with the Site Manager Zivanai and SHE officer Kutlwano. About 10 KM of debushing out of about 100 KM, completed with no major incidents. pic.twitter.com/SpX5lQBVPN

Work will begin on the first section at the end of June 2022, with section two starting in September 2022. The line will use 650 wooden poles and 80 steel structures. It will involve excavation, positioning, assembly, dressing, planting, backfilling, and compacting, followed by stringing, tensioning and regulation. Testing, commissioning and line energization will be undertaken at the end of the process.

Work on the transmission line is expected to be completed by mid-2023, with substations ready in the second half of 2023. Initial electricity generated will be sold to Botswana Power Corporation under a 10-megawatt power purchase agreement (PPA). The first revenue from this PPA is expected by late 2023.