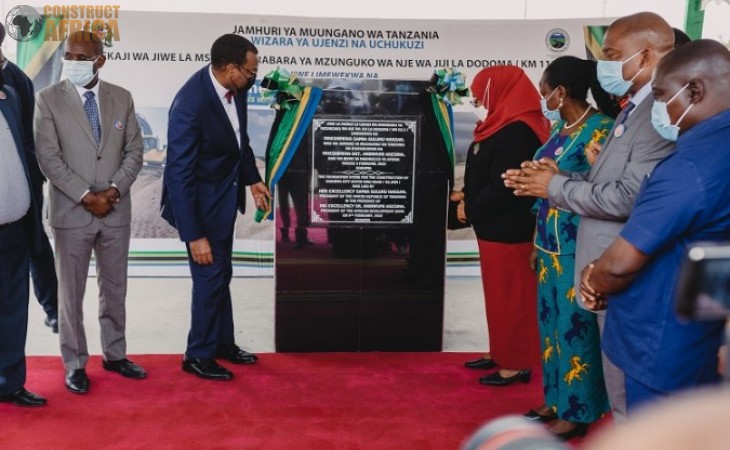 Construction of the landmark Dodoma City outer Ring Road project in Tanzania has been formally launched.

Hundreds of local residents gathered to witness the occasion in the country’s capital, Dodoma. They waved the Tanzanian flag and jubilated as the two leaders laid the foundation stone. The 112.3-kilometer road project, largely funded by the African Development Bank, forms part of the Trans-African Highway Corridor that links Cape Town to Cairo via Dodoma, crossing the Central Corridor via Dar es Salaam to the interior of Tanzania.

President Hassan thanked the Bank for its vital role in the country’s development. “We salute the African Development Bank for its strategic support to Tanzania, especially its support in infrastructure development,” she said as she paid tribute to her predecessor, the late President John Magufuli, for initiating the project. “This road will open markets for us, enabling us to produce more and build the economy.”

Adesina was loudly cheered by residents and Tanzania’s government officials as he highlighted the various projects in Tanzania that the African Development Bank is funding. “As we lay the foundation stone today, we are also laying the foundation stone for a better future for Tanzania,” he said.

“The Dodoma Outer Ring Road is more than a road project. It will include well-designed social infrastructure that benefits the youth and women, strengthen the institutional capacity of the executing agencies, and deliver improved road safety measures,” said Adesina.

The African Development Bank Group approved funding for the Dodoma City Outer Ring Road in 2019. The total project cost is $214.69 million, with the Bank providing nearly 65% of the funding or about $137.3 million. A further $41.8 million comes from the Africa Growing Together Fund, financed by the People’s Bank of China. The Tanzanian government’s contribution to the project is $34.5 million.

The road project forms part of a masterplan to transform greater Dodoma into a thriving, sustainable city for its 2.4 million people. It serves the regional markets in Tanzania, Burundi, Rwanda, Uganda and the Democratic Republic of Congo, demonstrating one of the African Development Bank’s High Five priorities – ‘Integrate Africa’.

Once completed, the road is expected to improve accessibility to and around Dodoma City and the region. It will also reduce transport costs and travel times.

Dodoma residents are already looking forward to the difference the new road will make in their daily lives. “The road will improve my taxi business, as I will be able to make many trips with customers,” said Vincent Donald, a Dodoma taxi driver. “Before, I managed only a few trips because of the rough road,” he added.

Adesina arrived in Tanzania on Monday for a three-day official visit of the country. He was accompanied to Dodoma by the Bank’s senior officials, including the Executive Director for East Africa Amos Cheptoo, the Regional Director General Nnenna Nwabufo, Director for Strategy Alex Mubiru, Chief Economist for Tanzania Jacob Oduor, who is also the Officer-in-Charge of the Bank’s office in Tanzania, Senior Advisor to the Bank President on Communication and Stakeholder Engagement Dr. Victor Oladokun and the Director of Communication and External Relations Solomon Mugera.

Ahead of the laying of the foundation stone, Adesina held talks with President Hassan to discuss future collaboration.

Tanzania, a founding member of the African Development Bank, enjoys one of the largest Bank portfolios in the East Africa region. As at January 2022, the Bank’s active portfolio consisted of 23 operations valued at $2.5 billion.