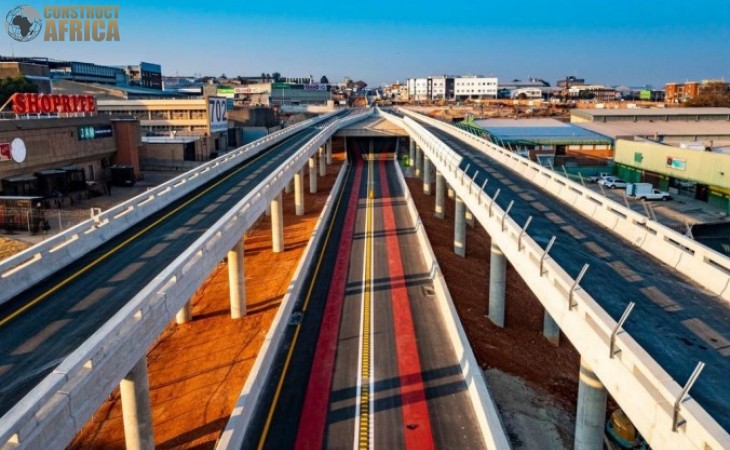 Two bus stations are being developed on this Phase 1C Sandton Central route.

According to figures reported by the City of Johannesburg Municipality, fifty thousand commuters use the Rea Vaya BRT, on average, daily.

The Phase 1C route runs from Johannesburg Park Station to Parktown, Orange Grove, Wynberg, and Alexandra and on to Catherine Street and Rivonia Road stations in Sandton.

Construction work on Sandton Central’s Rea Vaya Phase 1C route began in 2014 but faced delays mainly because of political instability and Covid-related causes. Two stations are being developed on this route in Sandton.

The Phase 1C route project, which was meant to be completed in 2019, is now scheduled for completion in 2024 with the construction of the second and final Rea Vaya station on Rivonia Road.

The primary objective of the Rea Vaya Phase 1C trunk route is to transport an average of just over
57 000 passengers a day by 2022. To date, Phase 1A and Phase 1B are operating with a daily
average of 50 000 passenger trips.#WattInterchange #JoburgRoadSafety ^LM pic.twitter.com/1b7i6s2Pqg

At the time of the launch of Phase 1C construction, three transport interchanges and ten new stations were proposed. The three Interchanges were at Sandton, Alexandra, and Westgate, where several station modules will be grouped along with integrating other modes of transport, including walking and cycling. The new proposed stations were planned for Hillbrow, Grafton / Yeoville Bellevue / Kes, Louis, Doll House, Balfour, Corlett, Bramley, Wynberg, Athol, and Sandton City.

“The new Rivonia Road station is the latest in the many infrastructure improvements already made to roads, pavements, and public transport to support the Rea Vaya service in Sandton Central. Projects like this help Sandton Central remain at the forefront of well-managed central business districts,” said Elaine Jack, manager of the Sandton Central Management District (SCMD).

Several infrastructure improvements have also been made in Rea Vaya, which have helped improve access to Sandton Central. This included building new bridges, widening major roads, and building cycling and pedestrian facilities. The new infrastructure will help to integrate the city’s transport system seamlessly.

“These bus rapid transit services are a standard feature of the world’s leading cities. For Sandton Central, this will ensure that South Africa’s financial centre remains well-positioned to attract business, investment, shoppers, tourists, the workforce, and residents with its accessibility to light, sustainable and affordable personal transport,” said Elaine.