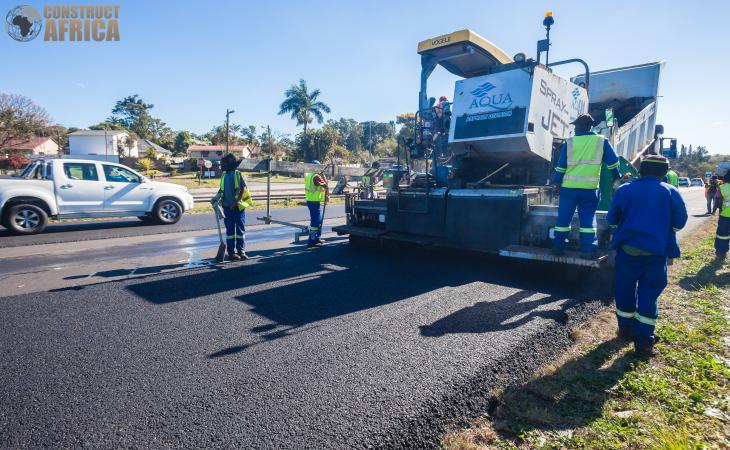 Locally available micro-fillers and recycled tyres have been successfully applied by South Africa's Council for Scientific and Industrial Research (CSIR) and asphalt production company 'Much Asphalt' to construct a road section.

The Council for Scientific and Industrial Research’s (CSIR) new research efforts towards providing alternative product and knowledge routes for the asphalt pavement industry are paying off. The intention of the research is to open up the industry and enable the inclusion of more players (job creation) and eventually engineer economical, yet better performing roads.

The (CSIR) has been focusing on locally available alternative additives that would be much cheaper than the conventionally imported additives, as well as creating sustainable use of recycled materials that have an economical benefit for the industry, while resolving an environmental challenge for the country.

Using locally available micro-fillers and sustainably using recycled tyres, the CSIR and Much Asphalt successfully constructed a road section. After just over a years’ worth of combined laboratory development and evaluation efforts between CSIR Smart Mobility and the Much Asphalt Gauteng Regional Laboratory, the project came to fruition when both products under development were produced and paved into a controlled trial section in Roodepoort, Gauteng.

The 200 m-long trial section included a 60 mm modified enrobés à module élevé (EME) base layer and a 40 mm modified bitumen rubber surfacing layer that was constructed over a cleaned gravel base layer treated with an SS60 tack coat prior to paving. The location of the trial section, starting from the weighbridge of the Much Asphalt Roodepoort branch to the public road tie-in on the approach to the site, was selected specifically to allow ease of continual performance measurement while having up-to-date details on the type and amount of traffic that moves across the section.

Georges Mturi, senior researcher and manager of CSIR's Advanced Material Testing Laboratories says “During both the development and trial phase, several performance characteristics were evaluated as predictors of in-situ performance, which served as the baseline for the in-situ performance evaluation that were set to run on a three-monthly basis for at least the first year after construction”. In this regard, he adds “the evaluations and visual inspections have shown that after nine months of traffic and environmental exposure, the layers are performing as expected”. To date, no edge breaking is present where heavy vehicles are moving onto and off of the surfacing, no permanent deformation is present on the surfacing, with particular focus at stopping locations or where vehicle turning takes place and, to date, there are no signs of any deflection or temperature-induced crack formation taking place - according to a CSIR media release by the CSIR Strategic Communication unit.

According to Joanne Muller, Much Asphalt Regional Laboratory Manager, “The developed and trialled technologies, aimed at improving the performance properties of standard 10/20 based EME, as well as having a viable replacement product for standard styrene-butadiene-styrene (SBS) modified A-E2 binder without detracting from pavement performance, are deemed effective and that can assist industry practitioners in the endeavour to provide long-lasting pavements to society”.

For bitumen users, asphalt manufacturers or any other intermediary bitumen suppliers, it will act as an easier means of correcting poor bitumen to pass performance specifications or improving the performance of standard bitumen from one grade to another, in the event of national bitumen shortages. In its media statement, CSIR stated that it is also important to highlight that the major benefit of this invention for the country would be an increase in the recycling of waste tyres in the road industry for the beneficial outcome of better-performing roads.