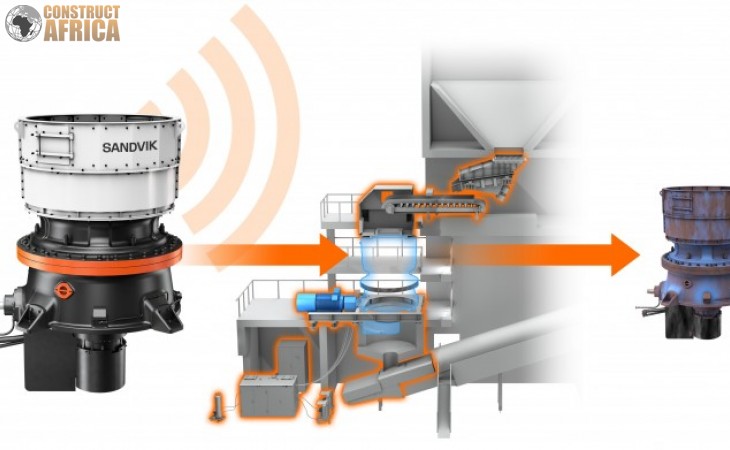 Several installations of the Reborn plant and the FastPlant are already running in South Africa’s quarrying industry.

The Reborn package delivers a new factory-tested crusher compatible with the customer’s existing plant infrastructure at a fraction of the cost of a complete crusher system. The second, FastPlants, is a range of pre-defined crushing and screening plants that drastically reduce delivery and installation times, a vital requirement for most new projects.

“South Africa has a very mature quarrying industry with a big population of relatively old crushers out in the field and yet they are often matched with infrastructure and auxiliaries. For example, hydraulic and lubrication systems, drives and motors, conveyors, and electrical components – that are still perfectly serviceable,” said Glenn Schoeman, Vice President – Sub Sahara Africa at Sandvik Rock Processing Solutions.

“This is where the Reborn plant comes into its own. Sandvik can install a new crusher on the same footprint and link it seamlessly to the existing infrastructure and auxiliaries. The new unit will be covered by an extended warranty and the package will also include comprehensive on-site training and periodic condition inspections. All told, capex savings can be as much as 40%.”

Schoeman said for Reborn crushers, Sandvik can, depending on the exact model and the customer’s requirements, equip it with the latest technology. These include advanced automation features such as the company’s Automation and Connectivity System (ACS), which continually monitors, analyses, and optimises the crusher’s performance. Another feature is the E-dump valve control system, which counters the problems caused by tramp iron and other uncrushable objects encountered during the crushing process.

He also points out that even when an existing crusher works reasonably well, a Reborn replacement will often make sense given the enormous productivity benefits and energy savings associated with new Sandvik machines.

“Take our new 800i series range of cone crushers,” he said. “The performance improvements which come with these machines are amazing. These come not only from the ACS, which is installed as standard but from other features. Bolted rather than welded top and bottom shell liners make liner changing 90% faster, to give one example, while all the machines in the range deliver more power output from less energy compared to their predecessors.”

Schoeman says the prime advantages of these packages are fast delivery and installation, allowing the plant owner to get into production faster. Another advantage is the elimination of expensive

customization. “Delivery will generally take about 12 weeks as opposed to two or three times this with a custom-designed plant,” he says. “The equipment is generally skid-based and comprises standard modular components but there is no compromise on quality and performance.”

Sandvik installed a FastPlant in the City of Tshwane’s Bon Accord quarry, established more than a century ago in Pretoria North, to supply Pretoria with road building materials. The upgraded facility, which opened in early May 2022, has a capacity of 270 t/h (ton/hour), a significant increase from the previous plant.

“A full suite of Sandvik equipment including jaw and cone crushers, screens and feeders make up the plant,” said Schoeman. He added that Sandvik collaborated on the project with several long-standing partners, mostly black empowered, who provided services such as civils, steel fabrication and erection, and electrical installation.

Further north in Africa Sandvik is also supplying a 300 t/h FastPlant to a quarry owner in Mali. “We are certainly not limited to the South African market with our Reborn and FastPlants and we expect them to prove very popular throughout the continent,” said Schoeman.

Sandvik Rock Processing Solutions (SRP) is a new Business Area within Sandvik that became operational in January 2021. Schoeman and his team are based at Khomanani, Sandvik’s new premises in Kempton Park, Johannesburg, and responsible for sub-Saharan Africa.

Photo: The Sandvik REBORN solution rebuilds a customer's crusher system by exchanging their worn-out Sandvik crusher for a new one, and re-using their crusher auxiliaries and infrastructure (Sandvik)