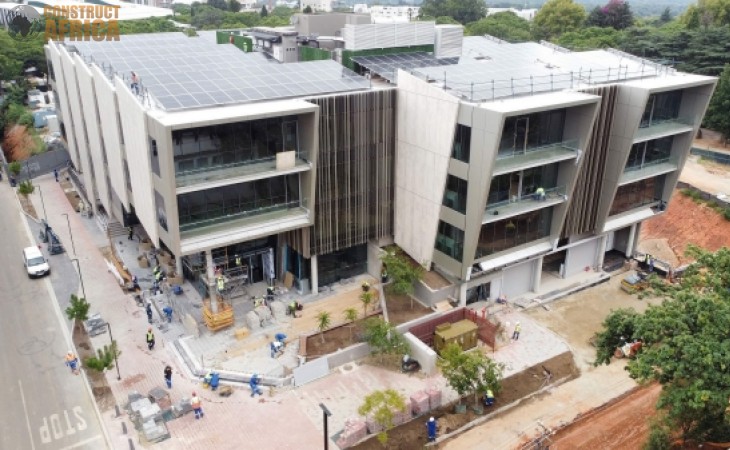 Concor met a tight deadline to hand over the Ikusasa building in Rosebank, Johannesburg. The company undertakes mining, civil engineering, building and road projects and operates in South Africa and other African countries.

The Ikusasa building comprises three basement levels and four storeys above ground. It is part of the Oxford Parks mixed-use precinct in Johannesburg to be used by Anglo-American Global Shared Services (AGSS). Warren Mills, Concor’s site agent, spoke about the management of about 70 specialized subcontractors by the company’s core team, allowing it to meet the needs of the project.

“Among the innovations used to cut the construction time was the use of larger foundation piles,” Mills said. “This meant that there was no need for concrete bases or excavating around each pile; instead, the design allowed the columns to be cast over the piles.”

Around 115 piles were cast with the columns spaced on an 8.4-metre by 8.4-metre grid which would hold the suspended concrete slabs. By speeding up this process, the wet trade contractors, that is, bricklayers, tilers and installers of the unitised façade panels, could get early access to the site. This helped speed up external works and internal fit outs at the construction site.

Another innovation used was to back-prop on two levels instead of the usual three. This enabled early access to the lower floor plate and allowed for early brickwork and “first fix” services such as floors, ceilings, electrical supply cables and water pipes.

The building's four levels comprise a 7,500-square metre gross living area with three basement levels making up 10,300 square metres. A total of 8,700 cubic metres of concrete and 800 tonnes of reinforced bar were used.

The company used sustainable practices at the building site, to reduce, reuse and recycle construction waste. This included separating waste at the source, and ensured that rubble, wood, steel and plastic were segregated. Preventing waste cross-contamination helped ensure efficient and cost-effective recycling of waste.

Did you know that we are committed to local sourcing?

For the Ikusasa office block at Oxford Parks we sourced 20% of our materials from within 400 km of the site. Read more here: https://t.co/UEJQUjrb6l #sustainability #construction pic.twitter.com/k5S5SXoROj

The Ikusasa building will be the first of Concor's projects to achieve a 6-Star Green Star SA Office V1.1 design certification.

According to Concor contract manager Martin Muller, “Concor’s strict performance strategies to manage water use, energy consumption, process waste and pollution all contribute to upholding critical environmental standards.”  “In addition to carefully applying our client’s sustainable designs, our quality systems all contribute to the points requirement in the GBCSA rating,” said Muller.

On the Ikusasa building project, Concor applied a rigorous Waste Management Plan, which saw 70% of demolition and construction waste being re-used or recycled rather than going to landfill.

According to Annelide Sherratt, head of department for green building certifications at Solid Green Consulting, four key members of Concor’s site team completed the Green Star online course – which helped the team understand and apply sustainable ratings on the project. Sherratt explained that the Green Star certification focuses on nine categories of sustainability achievement, from management and materials to the reduction of energy use, water and emissions.

“At the Ikusasa project, Concor reduced the portion of ordinary Portland cement used in their concrete mixes by 30% as an average across all concrete mixes used in the project, and achieved a level of 60% recycled content in the steel requirement,” said Sherratt.

Local sourcing of materials also played a role in achieving the 6-Star sustainability rating on the project, where Concor sourced 20% of the contract value from suppliers within a 400-kilometre radius of the site, and 10% within 50 kilometres.

In terms of energy efficiency, the Ikusasa building aims to generate as much energy on site as the base building requires. This will be achieved through the use of a photovoltaic solar generation system on the roof of the building, producing renewable power. The building’s design and operation will also enhance energy efficiency by applying sub-metering to track and control the main areas of energy consumption.

Conserving water is another important element of the building’s environmental performance. This is optimised using options like low-flow tap fittings and dual flush toilets, as well as water sub-metering for uses such as irrigation and bathrooms. Plant irrigation was reduced by 50% using water-wise irrigation methods and smart sensors. Also, the heating, ventilation and cooling system is cooled by air rather than by water.