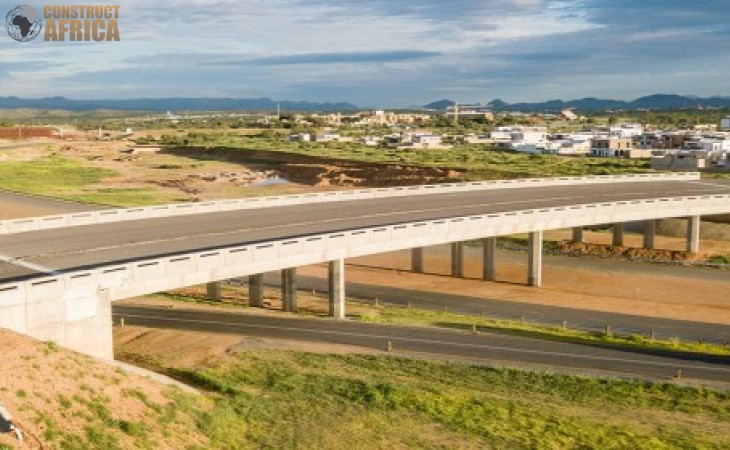 Construction works on the road between Windhoek and Hosea Kutako International Airport is underway.

The second phase, or Phase 2B, of the Airport Road project to upgrade the road between Windhoek and Hosea Kutako International Airport (HKIA) has begun. The project is being financed by a grant of more than N1.035 billion (US$69.5 million) from the Chinese government.

The project's construction contractor is Zhong Mei Engineering Group, with VKE Namibia Consulting Engineers as consultants. The Roads Authority is supervising the project.

Phase 1 of the project started from the Sam Nujoma interchange (on the existing Western Bypass), went east past the University of Namibia, the Auas interchange and the Robert Mugabe interchange and ended near the Old Age Home in Auasblick. This phase was 10 kilometres and was fully funded by the Namibian government.

Phase 2A consisted of a road continuing from the Old Age Home, following an easterly direction up to the Dordabis interchange, a distance of 19.5 kilometres.

At the ground-breaking ceremony earlier in May, John Mutorwa, Minister of Works and Transport said the new phase of the project (Phase 2B) included the construction of the third and last section of the road which would be a dual carriageway. That phase will begin at the Dordabis interchange and continue towards the HKIA and cover 21 kilometres.

“I have been informed that the scope of works of this phase includes the construction of 21.3 kilometres of dual carriage freeway, three interchanges two river bridges and drainage structures,” the minister said.

Mutorwa emphasized the opportunities from the project in supplying and subcontracting specialized works to local small and medium enterprises (SMEs) and subcontractors. The road represents a positive investment in the country and will contribute to socio-economic growth and serve future generations.

President Hage G. Geingob undertook today an inspection of progress made on one of the key infrastructure projects in the country, the Windhoek-Hosea Kutako International Airport Road. The highway, which will ease congestion to the Airport is on track for completion in 2024. pic.twitter.com/de2lbrc7lQ

“Furthermore, local subcontractors on the project will be exposed to technological advancements through skills transfer which results in positive economic growth for the nation,” Mutorwa said. He also confirmed the creation of 270 jobs for Namibians during the construction phase of the project.

Roads Authority CEO, Conrad Lutombi confirmed that the project would be completed by September 2024. It is part of the Harambee Prosperity Plan II and is also per the fifth National Developmental Plan (NDP5). The completed road would boost economic growth by allowing quicker movement to and from Windhoek. “The dual carriageway will also improve our links to the new SADC Gateway Port at Walvis Bay,” Lutombi said.