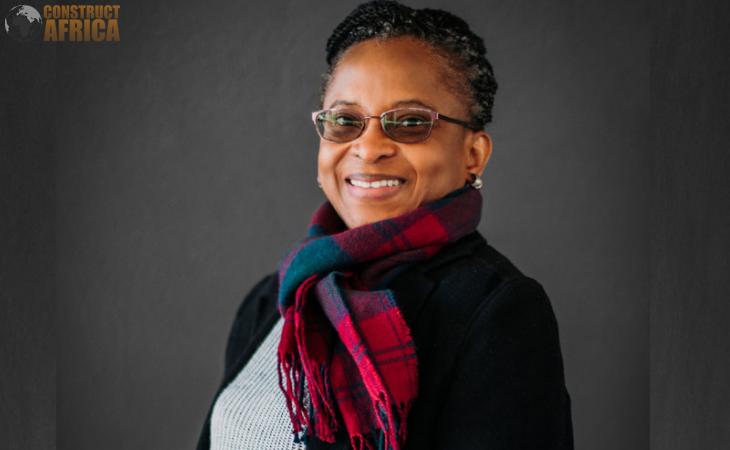 Prof Abimbola Windapo is a new professor in UCT’s Department of Construction Economics and Management.

For Professor Windapo, this confirms that she is truly “a role model for women, especially those from disadvantaged backgrounds, to give them hope that nothing is impossible”.

Transforming her field – both in and outside of the university – has been a constant in Windapo’s decades-long career. In what remains a male-dominated industry and faculty, Windapo has made numerous important contributions, including research into sustainable contractor development and serving as the chairperson of the Faculty of Engineering & the Built Environment’s (EBE) Transformation Committee from 2015 to 2017, a period of student protests across UCT’s campuses.

Further contributions and recognition include graduating five PhD researchers, receiving the 2020 National Science and Technology Forum-South32 Award in the Engineering Research Capacity Development category, being invited to coordinate the International Council for Research and Innovation in Building and Construction’s TG81 Task Group, and receiving various grants from the South African National Research Foundation (NRF), the Construction Industry Development Board and the Royal Academy of Engineering.

For the ceiling-smashing Windapo, the ad hom promotion, which is effective from January 2021, is particularly meaningful because it is recognition of her research, teaching, social responsiveness and administrative abilities from the “top-ranked university in Africa”.

“Also, it is going to open more doors of opportunities because people now start taking you seriously and are interested in you,” she said.

Entering and succeeding in a male-dominated industry wasn’t an entirely new experience for Windapo. Growing up in Nigeria, she was the youngest in a family of four children, surrounded by brothers. But being the only girl in this “man’s world” had its benefits; it meant support from her brothers, their help with algebra and trigonometry homework and taking up sports such as football, judo and karate (which Windapo took up both competitively and defensively).

In 1987 she broke barriers by graduating from the University of Ife as the first woman to study building. She then began working for multinational construction company Bouygues Nigeria Limited as a studies and planning engineer.

While working on numerous high-profile projects, Windapo completed a Master’s in Construction Management from the University of Lagos and later registered as a builder with the Council of Registered Builders of Nigeria.

Two years later, Windapo joined UCT while continuing to research and render professional services in the construction industry after registering with the South African Council for Project and Construction Management Professions as a professional construction project manager and mentor.

Asked what attracted her to engineering, Windapo said it was “pervasive problems such as unaffordable housing, overcrowding, inadequate infrastructure and service delivery, unhygienic environment, destitution and high rental costs”. She said these factors are responsible for the establishment of informal settlements, and health issues, which lead to a reduction in productivity and aggravation of crime.

With the scarcity in infrastructure in Africa, Windapo decided it was necessary to change this narrative, and early on in her career, she recognised the importance of housing and infrastructure and of finding new ways of adapting approaches and building materials so that “people could have a fundamental right to housing as required by the Constitution”.

“All human beings should have access to comfortable accommodation in a conducive environment,” she said.

Windapo has held true to her initial reasons for entering the field. When she started working in South Africa, she responded to the high failure rates of many construction companies, particularly in the small- to medium-enterprise sector, and the poor health and safety records in the industry.

“There were gaps in knowledge and societal needs that called for the research,” she explained.

“Before my research in this area, there was no previous recipe for sustainable contractor development, while the practices used by construction companies in ensuring health and safety were not established in the literature.”

Thus, the goal of Windapo’s research was to “show ways of transforming the construction industry while providing jobs, alleviating poverty, developing scarce skills and reducing the impact of construction activities on the environment through sustainable practices”.

She has certainly delivered on the objectives she set when she entered engineering, which is evident in her research, roles and recognition. But she has no intention of slowing down and remains committed to improving the industry for the greater good.

The research will continue, involving two aspects of innovation: organisational/business technology and the development of ideas premised on the adoption of the new design, technology, material component and construction methods that could be acquired by local tradesmen in solving the housing problem.

This article was originally published by University of Cape Town (Carla Bernardo). Please click here to read the original article.