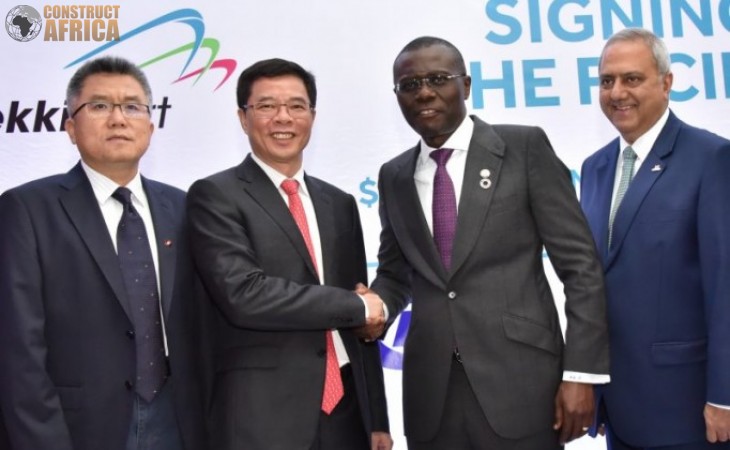 The port has received US$60m from the China Development Bank as the first tranche of the loan.

This first installment comes as work on the project reaches its halfway mark, with completion of the 1,900 metre core of the main breakwater.

Du Ruogang, the Managing Director of Lekki Port LFTZ Enterprise and the project’s developer, saw the receipt of the first installment as a major breakthrough to reaching the goal of commencing commercial operations at the port before the end of 2022.

Du Ruogang said, “We would like to appreciate the Federal Ministry of Transportation, Lagos State Government, and NPA as well as other stakeholders for the immense support towards the actualization of this world-class seaport.”

Babajide Sanwo-Olu, the Governor of Lagos State, had previously predicted a 2023 opening. Therefore, the project’s progress is taking an optimistic turn towards an earlier finish.

China Harbour is the construction contractor for this Lekki Port project. China Harbour is a subsidiary of China Communications and co-owns the Lekki Port LFTZ Enterprise along with the Singaporean conglomerate Tolaram Group. China Harbour is building the port on a finance-build-operate basis and, on completion, will run it on a 45-year concession agreement.

French logistics company CMA-CMG will be the port operator, and Nigerian consultant Louis Berger is the project’s engineer. This Lekki Port and Free Trade Zone is part of the country’s effort to capture trade in the West African region.

The West African region has strong growth potential but is grappling with poor infrastructure. When the project is complete, the Lekki port will accommodate ultra-large ships that can transport over 14,500 containers.

The current trend for container ships to be larger and heavier has forced the existing ports to compete with longer wharves, deeper navigation channels, and more sophisticated cranage.

Speaking during a monitoring visit to the project site, the Permanent Secretary of the Federal Ministry of Transportation, Dr. Magdalene Ajani, assured the stakeholders and promoters of the project that the Federal Government would play its part to ensure the seamless take-off of the Lekki port once the construction is completed in the last quarter of 2022.

Also speaking during the monitoring visit by the Federal Ministry of Transportation, the Managing Director/Chief Executive Officer of the Nigerian Ports Authority (NPA), Hadiza Bala Usman, stated that the NPA would play its part to ensure that the delivery timeline is achieved. Hadiza Bala Usman stated that “To meet the timeline for the Port, we would deploy the control tower as well as the BTS and GDMS, which are critical infrastructure needed for the take-off of the port operations. In addition, we have to begin the construction of the administrative block.”