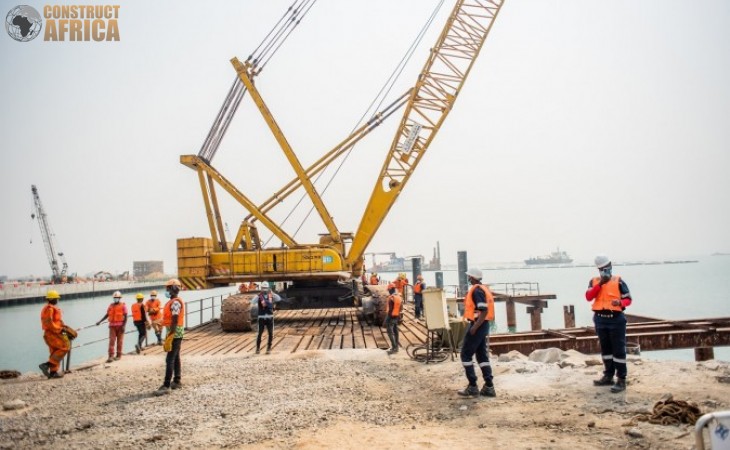 Construction work at the Lekki deep sea port in Nigeria is on track for completion by the third quarter of this year (2022).

According to the completion status of the project posted on the site of the project promoters, the Lekki Port LFTZ Enterprise Limited (LPLEL), the new port was almost 80% complete as at 28 December 2021.

According to the posted completion status figures:

Construction works on the port project is being undertaken by China Harbour Engineering Company (CHEC), who are the engineering, procurement, and construction (EPC) contractor for the project.

The Lekki Port will cover an area of 90 hectares in the Lagos Free Zone, 65 kilometres east of Lagos city. On completion, this seaport will be the largest seaport in Nigeria and one of the biggest in West Africa. The port will have a capacity of 2.7 million twenty-foot equivalent units (TEUs) of containers per annum. The port will also have a turning circle of 6oo metres and a water depth of 16.5 meters which is the deepest in Nigeria.

With the assurance of the continued support of its stakeholders, the project is expected to be on track for the commencement of port operations within the next few months. The contractor, China Harbour Engineering Company, is reported to be working non-stop to ensure timely completion of the project.

LPLEL, the promoter of the project, is expected to operate the port for 45 years under a Build, Own, Operate and Transfer (BOOT) concession agreement before finally transferring it to the Nigerian Ports Authority (NPA).

I was at the Lekki deep seaport this morning. The Port construction is about 80% completed. The last time I visited, the Quay wall was not visible, just the breakwaters. But today the top level of the Quay wall is almost ready…/1 pic.twitter.com/KZpQty8NEB

The flexible, optimised layout and strategic location of the port, as well as the state-of-the-art facilities, will provide Lekki Port with a distinct competitive edge over other West African port facilities.

The Lekki Port will enhance economic development around the Lekki sub-region through to the wider Lagos State through industrialization. When operational, the port is expected to generate a revenue of US$200 billion to the federal and state government, and will create up to 170,000 new jobs.

The Executive Governor of Lagos State, Babajide Sanwo-Olu has said, “The project is going to transform the way we do commerce. With the completion of the project, turnaround time will be faster; movement of goods will be cheaper, we can see businesses booming and ease of doing business will be improved,”