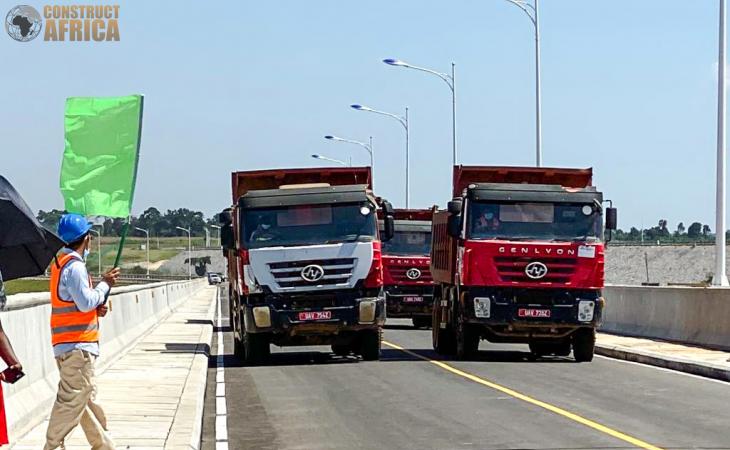 Newly Constructed Isimba Bridge in Uganda is Open to Traffic

The newly constructed Isimba Dam bridge connecting Kamuli and Kayunga districts has been commissioned by Ugandan President Yoweri Museveni and is now open to traffic.

"It is a great opportunity for the people of Kayunga and Kamuli districts who can now connect from one end to another," said President Museveni while commissioning the newly finished bridge.

On 29th December of last year, the new Isismba bridge was assessed to determine if it could manage heavy load and it passed with flying colors. Mr. Lawrence Pario, the head of bridges and structures at the Uganda National Roads Authority (UNRA), proudly announced that the success of the dynamic load testing meant that the bridge was safe for use. The testing exercise lasted for seven hours and involved placing 4 dump trucks that weighed 30 tonnes each on the bridge.

“This exercise is very important in bridge construction because we have to test it to confirm whether it is fit for public use before it is commissioned,” said Mr. Lawrence as he headed the testing exercise. After seven long hours under the sun, Mr. Lawrence was relieved when he said, “It has passed the test and we shall recommend to the relevant authorities that it is ready for commissioning.”

And commissioned it was.

On Thursday, the 7th of January 2020, President Museveni officiated the commissioning ceremony for the completed bridge. This bridge is part of the US$567.7 million 183MW Isimba Hydro Power Plant & Isimba-Bujagali Interconnection Project.

China International Water and Electric Corporation, the same company that constructed the 183MW Isimba Dam, is responsible for the successful construction of this project. Construction started in August 2019 and was completed in December 2020. The bridge is approximately 890 meters long and lies 500 meters downstream of the Isimba Hydropower Plant. It also has a deck that is 11.5 meters wide and is well lit at night.

This bridge is a big deal as it will help boost trade between the Kayunga and Kamuli districts. Also, it will create an alternative route for travelers who are moving to and from the eastern region. These travelers have previously been using the ferry but its unreliable travel schedules have been costing them. With the Isimba bridge, they can now happily carry out their activities with ease.

In July 2019, the Uganda National Roads Authority (UNRA) signed a memorandum of understanding with the Uganda Electricity Generation Company Limited (UEGCL) and the Ministry of Energy to supervise the construction works.

However, early in the year, Parliament Speaker Rebecca Kadaga made a claim that funds for this project had been misappropriated by officials in the Ministry of Energy. Nonetheless, Irene Muloni, the Minister of Energy at the time, was quick to dismiss these claims.

Everyone seems happy with the successful completion of the project including the landowners who were settled in the Kamuli district. Ms. Kikomeko Mwanamwoiza, the Kayunga Resident District Commissioner, has encouraged the residents to use the bridge to do business with the neighboring districts. She explained that they can now increase their household incomes by taking advantage of the new bridge and the opportunities it offers.