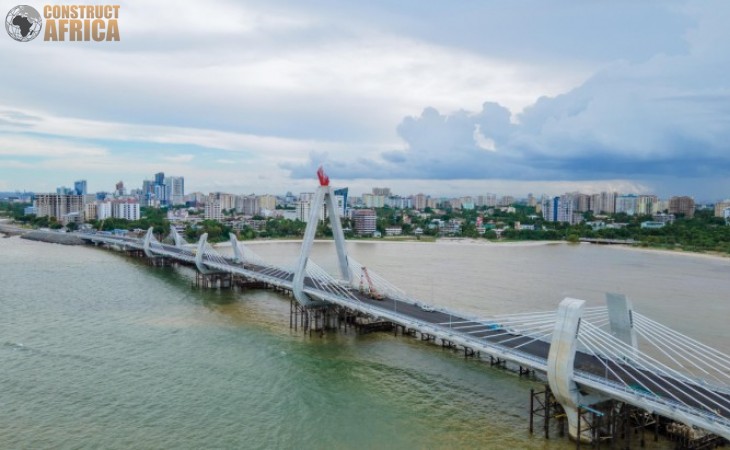 The new Tanzanite bridge links Aga Khan Hospital and Coko Beach in Tanzania's capital city, Dar es Salaam. The bridge was completed and open to the public on February 1 2022.

The bridge structure has a load capacity of 180 tonnes, and is expected to carry 55,000 vehicles per day and reduce traffic congestion along the old Selander Bridge and along the Ali Hassan Mwinyi Road.

The Tanzanite bridge has a unique design which combines the characteristics of a girder bridge and a cable-stayed bridge. This design makes the bridge structure lighter. According to the contractor constructing the bridge, the design also enhances the construction and economic feasibility of the structure.

Construction works on the bridge commenced in 2018. Tanzanian President, Samia Suluhu Hassan, paid an inspection visit to the project in November 2021 at which time the bridge was reported to be 98.4% complete.

Construction of the bridge was completed in January 2022, and the bridge became operational on the 1st of February 2022.

The bridge project was jointly funded by the government of the Republic of Tanzania and the government of South Korea. South Korea’s Economic Development Cooperation Fund (EDCF) provided a sum of US$107 million for construction of the Tanzanite bridge, which is reported to be 82.9% of the entire cost.

The ECDF is a Korean Government fund established in 1987 to support the industrialization and economic growth of developing countries. The fund is operated and managed by the Export-Import Bank of Korea.

"The project was EDCF's largest construction project in Africa and Tanzania's presidential pledge project. GS E&C successfully completed this construction project within the fixed contract period, which has increased our reliability," a GS E&C official said. "It will greatly help us have more business opportunities in Africa in the future."