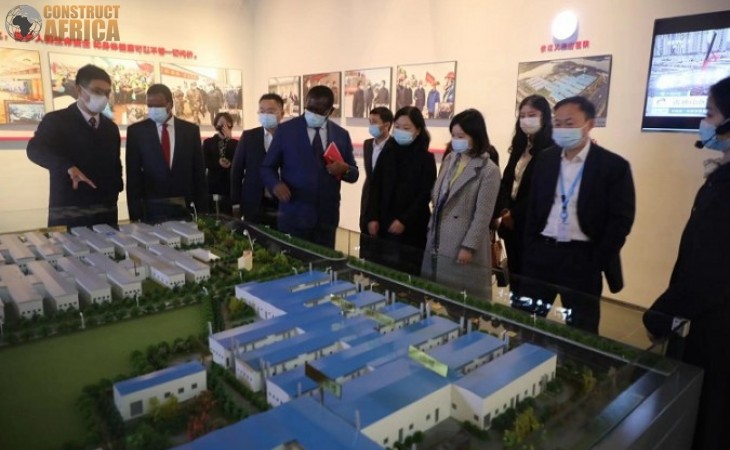 Chinese construction companies have become major players in Kenya, where they are actively involved in changing Kenya’s infrastructure landscape whilst also being engaged in acts of philanthropy.

The Chinese companies have been involved in several iconic construction projects underway in almost every corner of Kenya, such as the Global Trade Centre (GTC) in Nairobi, the Nairobi Expressway, and the Lamu deep seaport.

The 184 metres tall GTC Tower, whose construction began in July 2015, is owned by Chinese firm Avic, which intends to set up its Africa hub in the building. The GTC Tower was opened to the public on December 23, 2021 – in an event that was attended by President Uhuru Kenyatta.

Construction of the 27 kilometres Nairobi Expressway is being undertaken by the Chinese contractor China Road and Bridge Corporation (CRBC). The Nairobi Expressway project is estimated to cost US$575 million, and is expected to be completed in March this year (2022). CRBC will also will operate the expressway for a period of 27 years.

The construction contractor for the Lamu Port project is Chinese contractor, China Communications Construction Company (CCCC). Construction works for Lamu Port began in December 2016 with the dredging works on the first three berths. The first berth opened in October 2019. The second and third berths were opened in December 2021, marking the completion of the first phase of construction. The port has a planned 32 berths of which the first three berths constructed by CCCC are estimated to have cost about Ksh40 billion (approx. US$350 million). Lamu Port is also part of the Ksh2.5 trillion (approx. US$23 billion) Lamu Port-South Sudan-Ethiopia Transport (LAPSSET) corridor development.

Although the Chinese construction companies seem to be focusing on profitable construction projects, they have been actively involved in fulfilling their social responsibility as well. The Kenya-China Economic and Trade Association released a report detailing the benefits of these social initiatives. Collectively, Chinese firms are reported to have created 50,000 jobs for Kenyans with a localization rate of around 95%. This has particularly helped to drastically reduce the pandemic induced unemployment.

Glad that 400+ Chinese enterprises in Kenya create 120k+ job opportunities and continue to give back to the local community. pic.twitter.com/bvJony95A0

Chinese ICT firms such as Huawei, Star Times and Avic International provided support for 2,000 Kenyan students from over 20 universities who were cut off from the learning system during the pandemic. This support was provided through the Huawei-powered Talent Online platform, which the students accessed to continue their studies.

Chinese firms also provided help to the Kenyan government during the Covid pandemic crises by delivering medical supplies worth Ksh 64.5 million. The medical donations from China were transported through the Chinese-operated SGR railway, and through China Southern Airlines.

Community roads, water plant setup, and upgrading of learning institutions through classroom renovations and learning material distribution are also some of the major steps taken by these firms. Initiatives like the Luban workshop, a joint venture between Machakos University, Tianjin City Vocational College and Huawei Technologies is taking a step to integrate Kenyan students into fields such as cloud computing. China and Kenya have exchanged a slew of ideas to adequately skill young people and equip them to be industrial and innovative leaders.

All these projects have created a sense of understanding about national development among the Kenyans. They now have first-hand knowledge of large scale project implementation. There is a framework set in place to implement and execute future projects. In addition to this, there are several skilled professionals in rail and road construction, capable of providing services outside Kenya as well.

Kenya's President Uhuru Kenyatta has defended the country's reliance on Chinese support for their infrastructure projects. While inspecting progress on the Nairobi Expressway project in December 2021, the President said: “Our partnership with China is one that is mutually beneficial, that is based on win-win and we are very grateful to the Chinese government and the Chinese people for the support they continue to render not only to our country but to the rest of Africa,"

Top Photo: China Construction Third Engineering Bureau officials explain one of their most famous projects in Kenya - the Covid Hospital in Nairobi which was built in 5 days (@kenyainchina1 Twitter Handle)