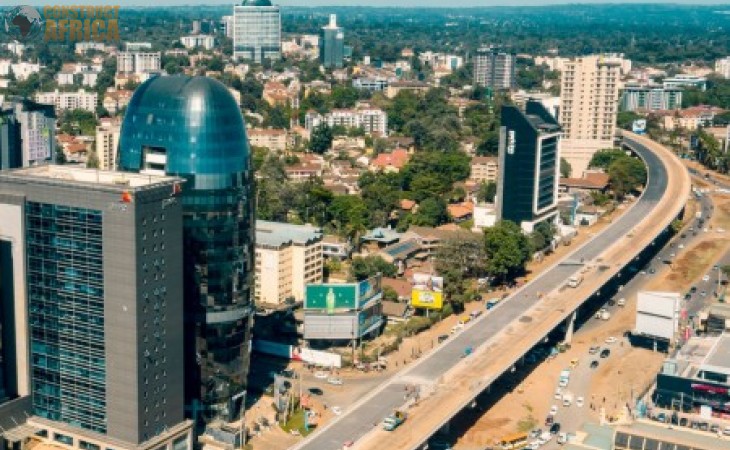 The tolled four-lane and six-lane dual carriageway will run over 27 kilometres, and will link Mlolongo town in Machakos county with Jomo Kenyatta International Airport to the Nairobi-Nakuru highway.

The road will form part of the northern corridor that ensures passage to around 85% of the cargo destined for neighbouring countries like Uganda, Rwanda, the Democratic Republic of the Congo and South Sudan.

The project has been financed, and is being constructed, by the China Road and Bridge Corporation (CRBC) in partnership with the Kenyan Government. The Kenyan Government spent more than Ksh2 billion (US$18 million) on land acquisition for the project.

On completion of the construction works, the CRBC will operate and maintain the road for at least 27 years. It will collect revenue through tolls from vehicles. The expressway will then be handed over to the Kenyan government in 2049.

The groundbreaking ceremony for commencement of construction work took place in October 2019. Construction has been steadily progressing since.

In August 2021, the Kenya Highway Authority (KeNHA) announced that the road will be completed and operationalised in June 2022. At the time, KeNHA chair, Eng. Wangai Ndirangu, stated that the project was 57% complete with the heavy works having been completed.

"I would say that whatever is remaining now is the lighter portion. Between now and December 2021, we are likely to see that all the heavy works involving deep excavation, diversions completed. For the period between January 2022 and June 2022, we will proceed to install the infrastructure that will allow us to operate the road furniture, marking, and the tolling booths" Ndirangu stated.

However, in December 2021, President Uhuru Kenyatta made an inspection tour of the expressway and indicated that the project was on track for completion by March 2022. During the inspection visit, President Kenyatta launched the last box girder along the main alignment of the Nairobi Expressway. Also present at the inspection were Infrastructure CS James Macharia and NMS DG Mohamed Badi, who expressed their satisfaction at the progress of the project.

In January this year (2022). Kung’u Ndung’u, director-general of the Kenya National Highways Authority (KeNHA), said in a notice that "Construction of the Nairobi Expressway continues to make good progress with its completion status standing at 82 percent. The project is on schedule for opening to the public by March”. Mr. Ndung’u further stated that "construction of the operation and monitoring center stands at 99.5 percent while 98.5 percent of elevated sections have been built".

Nairobi Expressway Updates: Click on the link below to see more: https://t.co/oUOaHA32L8 pic.twitter.com/veNtKIeRQi

The expressway will cut travel time from the south to the west of Nairobi from two hours to 20 minutes during peak time. It will boost connectivity between Nairobi and the Northern corridor. It will also reduce traffic congestion through the city, especially along Mombasa road, Uhuru Highway and Waiyaki way. This will solidify Nairobi’s position as a business hub.