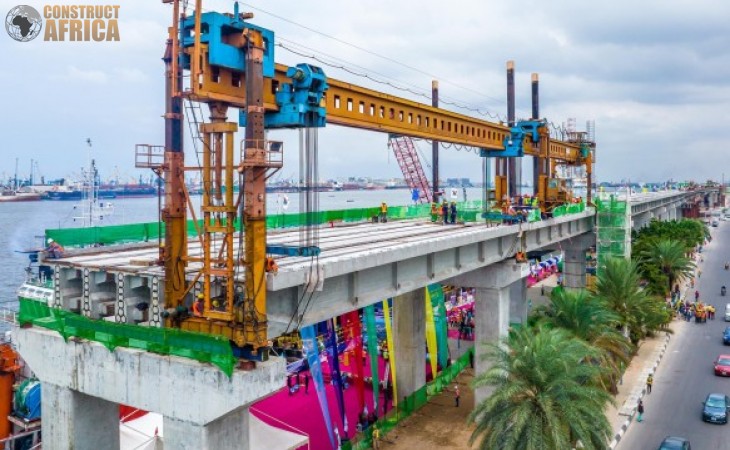 Passenger services on the Blue and Red lines expected to begin in the first quarter of 2023.

A light rail system is being constructed in Nigeria's commercial capital, Lagos, under a public-private partnership (PPP) arrangement. The Lagos state government is sponsoring the project, and Lagos Metropolitan Area Transport Authority (LAMATA) is developing the light rail system on behalf of the government.

The rail network will have seven lines, colour-coded as follows:

Speaking during a recent visit by officials of the Central Bank of Nigeria and the consortium of banks funding the first phases of the Blue and Red lines, Engr. Mrs. Abimbola Akinajo, the Managing Director of LAMATA, confirmed that all fixed infrastructure for the first phases of both lines would be completed by the fourth quarter of 2022. She added that testing and commissioning of the Blue and Red lines would also be completed within the same period.

China Civil Engineering Construction Company (CCECC) is the construction contractor for the Blue line. CCECC was responsible for developing the design of the rail infrastructure. They are also responsible for construction which is being done in phases. Phase 1 will run from the National Theatre to Mile 2 section, and phase 2 from Mile 2 to the Okokomaiko section.

The Lagos State government is funding the 27-kilometre-long Blue line that will run between Okokomaiko and Marina, with CPCS Transcom as the transaction adviser.

The Blue Line's initial completion date of 2011 was pushed back to December 2022 due to funding issues.

In 2018, LAMATA signed an agreement with French rail transport company, Alstom, for the two phases of the Blue Line project. Under the agreement Alstom will electrify a portion of the line and substations during phase 1. In phase 2, Alsom will partner with the Lagos State government in structuring financing from Export Credit Agencies (ECA) to provide metro trains, CBTC based signalling, the operation and control centre, passenger information services and the ticketing system in the stations.

In December 2019, CCECC completed the construction of a sea-crossing bridge section of the Blue line.

During an inspection visit by Lagos State governor, Babajide Sanwo-Olu, to the Blue Line project in April this year, construction of the Blue line was reported to be 90% complete.

The last T-beam for the Blue line was launched on August 18 this year, at a ceremony attended by Governor Sanwo-Olu. Speaking during the launch of the final T-beam, the governor said "Today's final T-beam launch indicates that we are gradually inching toward the completion of the civil infrastructure for the Blue Line". He also said the rail line will be tested immediately after completion, while passenger movement will start in the first quarter of 2023.

The Red line of the Lagos metro will be 30 kilometres long, running between Marina and Agbado.

Construction works on the Red line started in April 2021. This line is also being constructed by CCECC.

The Red line integrates with the Ikeja Bus Terminal, Oshodi–Abule Egba Bus Rapid Transit (BRT) lane, the future Orange Line, which starts from Ikeja to Agbowa, and the General Aviation Terminal One of the Murtala Muhammed International Airport through a skywalk. Part of the Red Line route will share the existing Nigeria Railway Corporation rail corridor.

Dar Al-Handasah is the transaction adviser for the Red Line.

During an inspection visit to the Red Line project in August this year, the Lagos State governor, Babajide Sanwo-Olu, confirmed that the Red Line rail will commence operation by the first quarter of 2023. The governor noted that the project had entered into the finishing phase in which precast beams and other concrete fittings are being coupled to the constructed structures.

The governor was accompanied on the site visit by the deputy governor of Lagos State, Dr Obafemi Kadri Hamzat. Speaking during the inspection visit, Governor Sanwo-Olu stated that the contractor had given assurances that all the physical infrastructures of the project would be completed by the end of December to allow testing of the rail line before full operations.

“We are here to ensure that we exceed our promise so that the operation will start the first quarter of 2023. What they are doing is that the physical infrastructure is completed by December, the stations, all bridges, all walkways, all pedestrian bridges by December so that we can start testing. Operationally, it needs to take a few months. We are hoping that the operation will start within the first quarter of 2023" Governor Sanwo-Olu added.

Both the Blue and Red lines will have elevated road structures, and the Nigerian Railway Corridor will have 35 pedestrian bridges constructed over it.

Different sections of the lines will contain cable ducts, walkways, and a drainage system with two walls. A combined 5-kilometre viaduct rail over the road and a cable-stay bridge will link the Red and Blue lines.

Passenger services on both the Blue and Red lines are expected to begin in the first quarter of 2023.

Top Photo: Launching of the last T-beam for the Blue line by CCECC on 17 August 2022 (@Vincent_CCECC Twitter Handle | Vincent Liu)