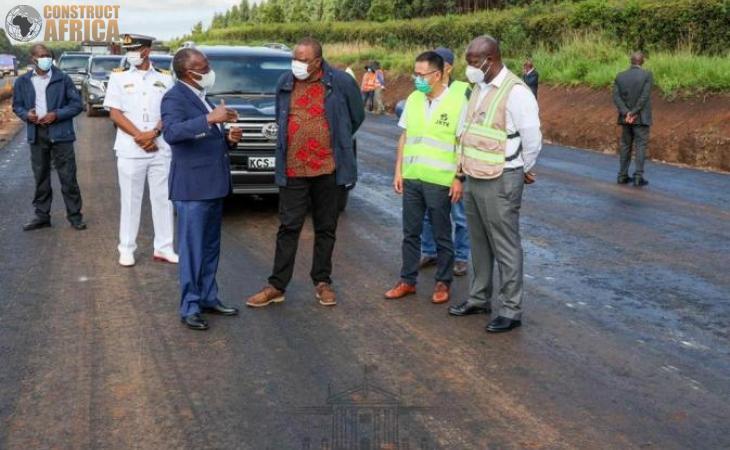 The Kenyan government wants the 84km dual carriageway to be fast-tracked for completion by June next year (i.e. June 2022). This project was originally scheduled for completion in 3 years time.

James Macharia, Transport Cabinet Secretary, reported that the government wants the Chinese company responsible for the construction works, Jiangxi Transportation Engineering Group, to ensure that the road is operational as soon as possible.

“The reason why we have routinely inspected the construction is to ensure that the projects are fast tracked to the new time frame. The president is also closely monitoring and looking forward to their completion,” said CS Macharia.

Macharia said this while inspecting the project at Makuyu in Murang’a back in February 2021. He was also reported to have said at the time that the government intends to expand a 15-kilometre stretch from Kenol to Thika town from the current two lanes to three. This is meant to absorb the traffic from the new dual carriageway into the Thika Superhighway without snarl-ups.

The project will have the current highway expanded to a four-lane dual carriageway and include a grade-separated junction at Makutano. The dualling of this road will enhance the capacity of the existing Trans-African highway by enhancing trade relations and improving transport services along the corridor.

The dual carriageway will form part of the Trans-Africa Highway (Cairo to Cape Town) and will connect the Northern Corridor (Mombasa-Malaba) from Nairobi to the Lapsset Corridor (Lamu-Isiolo-Ethiopia/South Sudan) in Isiolo, enhancing linkages between northern and southern Kenya, and boosting economic activity between these regions.

Mr Macharia said that the road was in bad shape before the expansion project began due to the heavy traffic flowing from Nothern Kenya. He also added that he is in consultation with Murang’a Governor Mwangi Wa Iria to have a modern market for the traders who will be displaced at Kenol.

“We have plans together with the governor to source for land near Kenol and construct a modern market similar to the ones we are constructing at Muthithi and Kangare to provide traders with a space to conduct their business,” Macharia said.

This project is one of the milestones of the Jubilee government. It will allow the current road to absorb the traffic it receives from Embu, Kerugoya, Meru, Mwea, Mukurwe-ini and Tumutumu areas and boost the socio-economic growth of the area.

Also, the dual carriageway will enhance economic advantages for Kenya to trade with Ethiopia and help the neighbouring country with its import challenges. Thanks to the new road, the local economic prosperity will increase.

“This road will transform the economic wellbeing of the Mt. Kenya region and make it easier for both farmers and traders to conduct their businesses,” Macharia said.