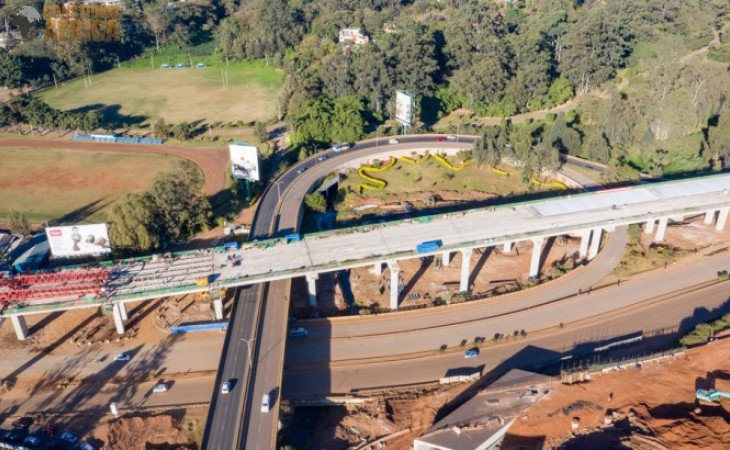 When complete in March 2022, the 8-lane elevated dual carriageway is expected to significantly decongest Mombasa Road and reduce travel time between Mlolongo and Westlands to 20 minutes.

On 23 December 2021, President Uhuru Kenyatta made an extensive inspection tour of the 27.1-kilometer Nairobi Expressway during which he expressed satisfaction with the progress of the key road.

During the inspection visit, President Kenyatta, who was accompanied by Infrastructure CS James Macharia and Nairobi Metropolitan Services (NMS) Director General Mohamed Badi, laid the final box girder bridge, a year after the first was laid on 26th December 2020.

"It is a proud moment for us as Kenyans as we are here today witnessing the laying of the last of these girders that are linking this new superhighway, the Nairobi Express Way,” the President said.

The President commended the contractor for a job well done and expressed confidence that the road will be ready for use by March next year.

“I want to the thank the contractors because we started this project exactly almost to date one year ago when we laid the first box girder and today, almost to the date, three days earlier to one year, we are now laying the last.

“I am confident with the kind of speed that they are moving at, the indicated date of March for completion of this road is bound to be met. I will be very proud to be able to drive all the way from Machakos turn-off to Rironi and hopefully, at that point, launch the road from Rironi to Mau Summit,” the President said.

“Our partnership with China is one that is mutually beneficial, that is based on win-win, and we are very grateful to the Chinese Government and people for the support that they continue to render not only our country but to the rest of Africa,” President Kenyatta said.

President Kenyatta said the expressway had created over 6,000 direct jobs, benefitted 200 sub-contractors and hundreds of other local suppliers of building materials such as steel, sand, cement and ballast.

“I want to thank everybody, the Ministry, the contractor, the Chinese Government, security agencies who have ensured that people are able to work on a 24-hour basis, NMS and all those who have been involved,” President Kenyatta said.

The Head of State observed that the expressway was among the many ongoing road construction projects in Nairobi totalling to over 420 kilometers.

“The difference that has been occasioned by road building, drainage and sewage being put in, I do believe that within another two years Nairobi will be a truly 21st Century city, catering for its population in a positive manner and in a manner befitting our people,” the President noted.

On his part Infrastructure CS James Macharia thanked the President for championing the project saying its completion will significantly decongest Mombasa Road.

“We thank you for the support, because this project will make a very big difference for our country. After it is finished in March, people will be taking 20 minutes only from the airport to James Gichuru Road,” CS Macharia said.

He said the expressway is just one of several Nairobi link roads lined up noting that a similar project to connect Mlolongo to the Machakos turn-off, a distance of 20 kilometers, was underway.