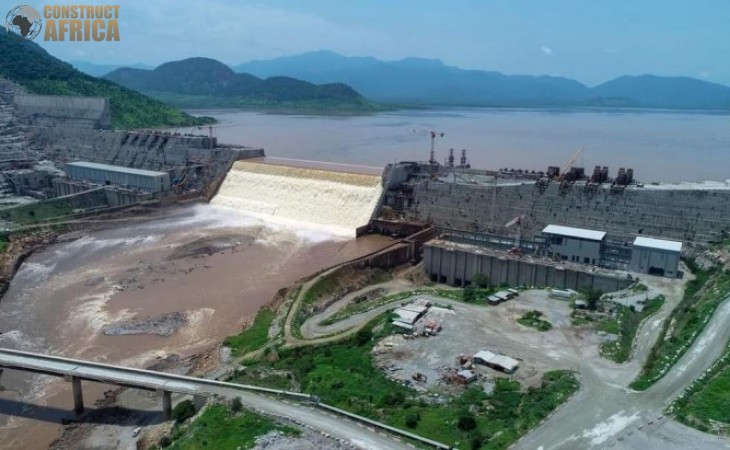 Ethiopian business newspaper, Capital, reported earlier this month (January 2022) that the works on the dam to start test power generation is completed.

In its pre-power generation stage, the dam is expected to generate 700 MW. Officials from the Ministry of Water and Energy explained that when the dam starts the first power production, it will be able to make up for 20% of the nation’s demand.

Construction of GERD commenced in April 2011. The project is being constructed by Italian construction firm, Webuild, for Ethiopia's state-owned utility, Ethiopian Electric Power. On completion, the hydroelectric power facility will comprise a main dam in roller compacted concrete with two power stations installed at the left and right banks of the river.

The GERD will have a total installed power of 6,000 MW of electricity and an estimated production capacity of 15,000 MWh per year.

Prime minister Abiy Ahmed visits the #Ethiopian Renaissance Dam project today hours before the operation of the low altitude 9 and 10 turbines, and the start of electricity production. pic.twitter.com/vxL8ZRF231

The first filling of the dam took place in July 2020, with 4.9 billion cubic meters of water stored. The completion of the second filling of the dam’s reservoir was announced in July 2021. Ethiopia claimed the second filling accommodated a capacity of 13.5 billion cubic meters of water, which was said to be sufficient to generate hydroelectric power.

In November 2021, Dr. Sileshi Bekele, Ethiopia’s chief negotiator and advisor on Trans Boundary Rivers and GERD, told reporters that overall construction progress of the dam had then reached 82%.

The GERD project is estimated to cost around US$5 billion, and is fully funded by the people and government of Ethiopia, including through internal fund raising in the form of selling bonds.

"What distinguishes GERD from other projects is the extent of hope and aspiration it generated for 65 mil
Ethiopians that have no access to electricity. It's also unique because the construction of the Dam is financed by the blood, tears, and sweat of ordinary
Ethiopians."

The dam site is located on the Blue Nile, a tributary of the River Nile, about 500 kilometres northwest of Ethiopia’s capital Addis Ababa and 15 kilometres from Ethiopia's border with Sudan.

The dam has caused a decade-old diplomatic standoff between Ethiopia and its neighbours downstream the Nile River, Egypt and Sudan. The downstream nations have expressed concern that the GERD will reduce the volume of water to their countries through the River Nile. Ethiopia has sought to reassure both countries that the project will have no harmful effects whatsoever, arguing that the GERD will be of great importance in Ethiopia’s economic development and energy generation, and that Ethiopia has the right to equally and fairly use the water for its development without causing harm to the downstream countries.