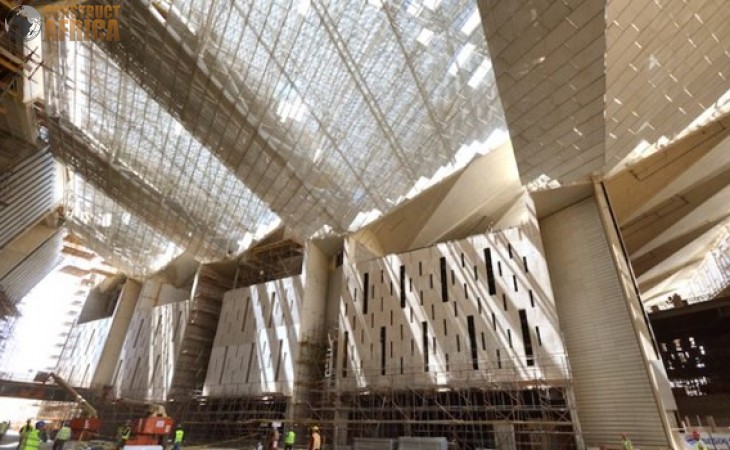 The new Grand Egyptian Museum will not only be the new crown jewel of Egypt, but will also be one of the largest, most modern, and most renowned museums in the entire world.

The new museum is located just outside of Cairo on the Giza Plateau (and next door to the Pyramids).

The story of the development of the Grand Egyptian Museum project is described below.

The ceremonial cornerstone of the Grand Egyptian Museum was laid in early 2002, although at this point in time no architectural or construction firms had been selected to build the new museum complex.

The main contract for the design of the Grand Egyptian Museum was awarded to the Irish architectural firm Heneghan Peng in 2003 after an extensive international competition. Eventually, in total, a team of 300 people from 13 companies in six different countries contributed to the design phase of the project, according to the Egyptian government.

The original cost of the Grand Egyptian Museum was estimated to be around US$500 million, but delays, changes, and other factors have driven the final price tag for the complex to over US$1 billion.

One of the first artifacts to be transferred to the Grand Egyptian Museum was an enormous 3,200 year old statue of Ramses II that had previously stood in the middle of a traffic circle in Cairo known as Ramses Square. Despite the new museum being nowhere near completion at the time, the government decided to go ahead and transport the 83-ton statue out to the conservation center in 2006 in order to halt its deterioration amid the pollution that had surrounded it during its five-decade residence in the square. In 2018, the statue was transferred to its final resting place at the Grand Egyptian Museum’s main entrance.

When everything is finally transferred not only from the current Egyptian Museum’s publicly displayed collections but also from its much vaster private storage areas, the Grand Egyptian Museum will host about 100,000 ancient artifacts, 4,549 of which will be from the tomb of the famous King Tutankhamun.

The Grand Egyptian Museum is expected to welcome around 15,000 visitors per day, roughly three times the number of people who visit the current museum daily. This will amount to more than 5 million visitors per year.

For more than a century, the Pyramids and the Egyptian Museum have been about a 45-minute drive from one another, with the Pyramids located out on the Giza Plateau to the west of the city at the edge of the Sahara Desert and the old museum located in Tahrir Square in the centre of downtown Cairo. The new Grand Egyptian Museum, however, will be located a short 2 kilometres away from the Pyramids, making it much easier for tourists to travel between the two and easing traffic congestion in both Cairo and Giza.

This article was provided by Engineering Consultant - Mohamed Osama Hassaan, a Partner at Smart Vision.