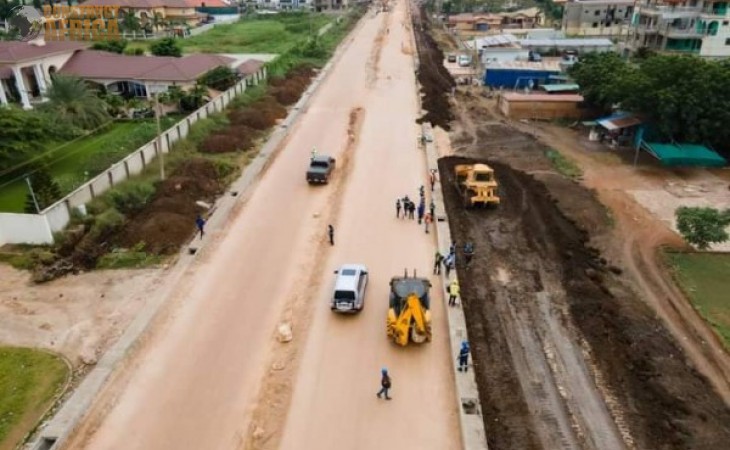 The government aims to improve road connectivity ahead of 13th All Africa Games in August 2023.

Reconstruction works are ongoing on the dualisation of the School Junction to the Tema Motorway (University Farms Road) project in Borteyman in the Greater Accra Region.

Messrs Oswal Construction Company Limited won the contract for the project in April 2022. The estimated completion time is 18 months.

The government’s major project aims to improve connectivity around the Borteyman Sports Complex for the 13th All Africa Games in August 2023. It also includes the construction of storm drains, access and service roads, street lights, road signs, and road markings.

Humphrey A Williams, the contractor’s representative, briefed the Minister of Roads and Highways, Kwasi Amoako-Atta, during his tour of the site in September this year, as part of a routine inspection of road projects in the Greater Accra region.

Williams estimated the road completion at 70% and said approximately 5 kilometres of earthworks were complete. The remaining kilometre would be done in the coming weeks, much earlier than scheduled.

“Dressing and asphalting materials are ready, and we would not disappoint the government and the ministry seeing the importance attached to the project as eyes would be on the game’s village,” Williams added.

Amoako-Atta lauded the work by the contractor and the level of completion so far.

In April of this year, the Hon. Kwesi Amoako-Attah handed over the site to the contractor, Oswald Investment Ltd, and construction began in May. pic.twitter.com/R1QdQGW6V4

“We need to empower our own and resource them adequately so that they could execute excellent jobs as compared to their counterparts in other countries,” he said.

Amoako-Atta commended the supervision of site workers to ensure that they work according to specifications.