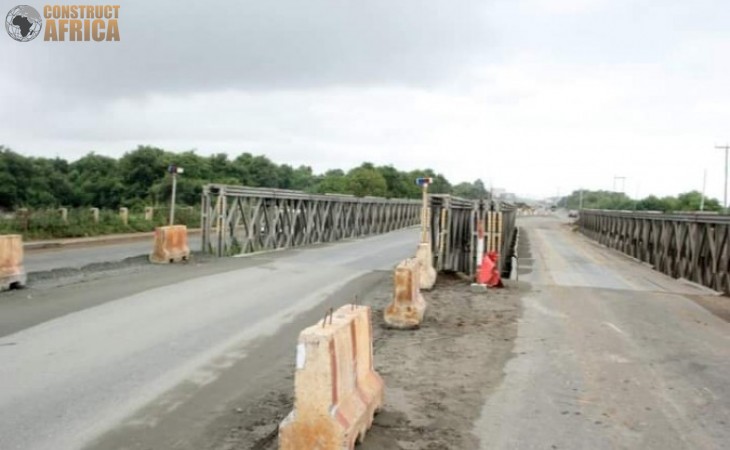 The project is expected to be completed by December 2022.

Reconstruction has begun on the Bailey bridge over the Kpeshie Lagoon in Accra, Ghana. China Ganzu International Corporation Economic and Technical Cooperation (CGICETC) is undertaking the reconstruction of the bridge.

The bridge reconstruction is expected to be completed by 15 December 2022, and is part of the ongoing 16-kilometre Tema Accra Beach Road expansion project.

The 26.6-kilometre bridge project is estimated to cost US$100 million. The bridge facilitates water flow from the Kpeshie Lagoon into the sea.

The first phase comprises a 16-kilometre road starting at the Independence Arch of the Black Star Square in Accra through Osu, Labadi, and Teshie to Nungua. China Ganzu International Corporation for Economic and Technical Cooperation (CGICETC) is undertaking work in this phase.

The second phase is 10.6 kilometres, running from Nungua to Tema Community Three, and will be constructed by China Railway Major Bridge Engineering Group Company Limited (CRMBEGCL). The work in this phase includes an 80-metre two-way four-lane road, a traffic signal system, and auxiliary works.

Phase 1 of the Accra-Tema beach road expansion project is currently about 65% complete.

Government recently paid Ghc 10m as compensations to those whose buildings and properties has been demolished to make way for the successful completion of the project.#YearOfRoads pic.twitter.com/pKKf84ityk

Kwasi Amoako-Atta, Minister of Roads and Highways, recently inspected several road projects underway in the Greater Accra Region. Accompanying him were Alhaji Dr. Awullo Abass, the Chief Director of the Ministry, and other directors of Urban Roads, Feeder Roads, and the Ghana Highway Authority.

The minister and his team saw progress during the Kpeshie Lagoon Bailey bridge inspection. At the site, the contractor had blocked the Accra-Teshie section of the road and was undertaking piling works to fix the pillars that would support the beams before commencing the concrete work.

Kwaku Diafo, the Resident Engineer, briefed the minister and his team and assured them that a concrete bridge would replace the steel metal bridge within the stipulated project scheduled time.

An appeal was made for motorists using the route to bear with the construction works underway. Diafo said two of the remaining three lanes of the stretch would be accessible to motorists going towards Accra during morning peak hours and reverse of the same during evening peak hours. That would help reduce traffic on the Accra-bound side in the morning and the Tema-bound side in the evening.