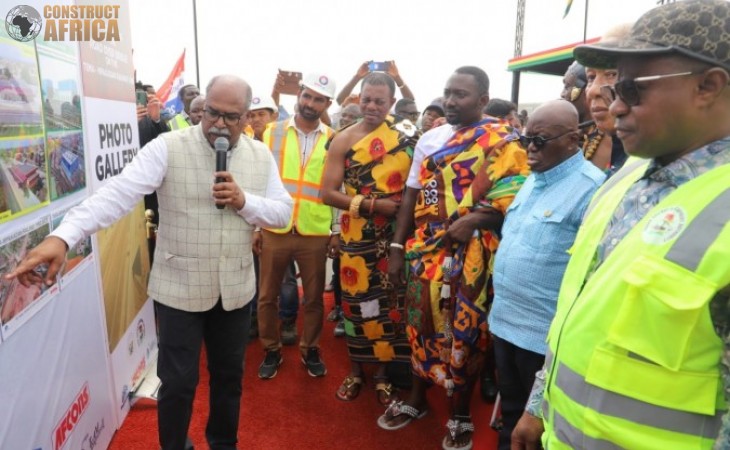 The 900-metre road spans across a bridge over the Tema-Mpakadan railway line at Afienya.

The president of Ghana, Nana Akufo-Addo, inaugurated the Afienya Road over Bridge Project on 7 December 2022. The project is part of the 97.7 kilometres Tema-Mpakadan Railway Line, set for completion in the first quarter of 2023.

President Akufo-Addo also inspected one of the eight Mpakadan railway stations along the stretch, and a 300-metre bridge across the Volta River at Afienya and Asuogyaman districts, respectively.

The inauguration of the new road now allows commuters from Tema roundabout to Eastern Region to comfortably drive over the railway line at Afienya, regardless of the time a train may be passing.

The 900 metres road and bridge over the newly constructed rail line at Afienya in the Greater Accra Region was constructed by AFCONS Infrastructure, an Indian contractor.

At the inauguration of the road and bridge project, the president emphasized the project’s ability to address imbalances between transport modes for long-distance travel and domestic freight movements from Accra-Tema northwards and vice versa using the Lake Volta transport system.

The president said on completion, the Tema-Mpakadan-Buipe transport project would link the Tema Port to the Lake Transport network, a distance of 400 kilometres, to open the lake to transport cargo, fuel, cement, and agricultural produce.

It will create a multiple-module road, rail, and lake transportation network to facilitate further cargo haulage and movement of people from the south to the north of Ghana through a mix of the intermodal transport system.

Current transport options of domestic freight and transit freight between Accra, Tema, and northern Ghana to Burkina Faso, Mali, and Niger are mostly by road via Kumasi, Tamale, Bolgatanga, Navrongo, and Paga.

The over-dependence on the road network and other alternative transport forms has resulted in congestion and overuse of the country’s roads, leading to increased traffic accidents.

In 2007, the NPP Government commissioned a feasibility study for a multi-modelling transport link between Tema and Buipe through Lake Volta.

In 2016, the Ghanaian Parliament approved a resolution for both the credit facility and the commercial agreement between the Ministry of Finance and the Exim Bank of India, with AFCON Construction Limited as a contractor of the project.

The construction, operation, and maintenance of the Tema-Mpakadan Railway Line would provide direct and indirect employment to a large Ghanaian population. The Tema-Mpakadan railway line is one of a series of rail projects lined up to develop and extend rail services across the country.

Top Photo: Ghanaian President Akufo-Addo being briefed by the Contractor of the road-over-bridge project at Afienya during the inauguration. (Ghana News Agency | gna.org.gh)