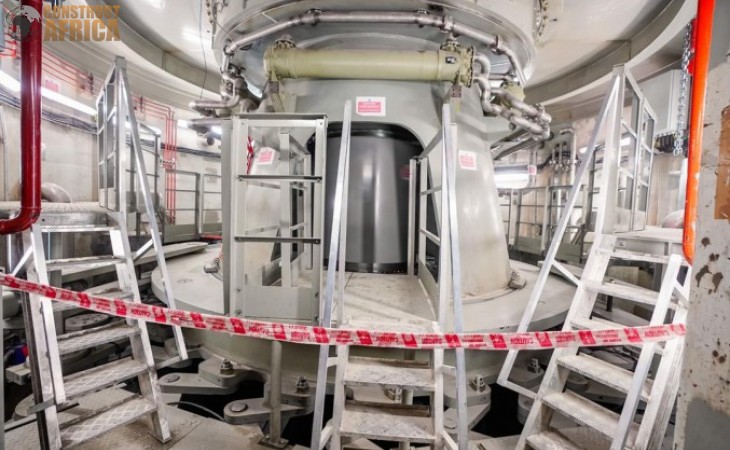 The first of 13 turbines being installed on Ethiopia's GERD mega-project has been powered up, starting electricity generation from the dam.

Ethiopian Prime Minister, Abiy Ahmed Ali, initiated power production at the Grand Ethiopian Renaissance Dam (GERD) on February 20, 2022, by pressing a series of buttons on an electronic screen which started a 375 megawatt turbine.

Today, Africa's largest power plant, the GERD’s first turbine began generating power. This is a good news for our continent & the downstream countries with whom we aspire to work together. As Ethiopia marks the birth of a new era, I congratulate all Ethiopians! pic.twitter.com/KoMEgIcGVk

The dam is a roller-compacted concrete (RCC) gravity-type, comprising two power stations, three spillways, and a saddle dam. A press release issued on 20 February 2022 by Webuild, the construction contractor for the GERD project, stated that the project is 84% complete. According to Webuild's press release, the main RCC dam will be 1,800 metres long and 170 metres high. The dam will create a reservoir covering an area of 1,875 square kilometres and containing 74 billion cubic metres of water. The rockfill saddle dam will have a volume of 15.3 million cubic metres and a crest length of 5,000 kilometres.

The GERD project was commissioned by Ethiopian Electric Power and is situated on the Blue Nile in Ethiopia's western region of Benishangul-Gumuz. Construction works started on the project in 2011.

On completion, the GERD will be the largest hydroelectric plant in Africa, with a total installed generating capacity of over 5,000 megawatts produced from 13 turbines. According to the official website of the project, the GERD hydroelectric plant will have an average annual energy production of about 15,759 gigawatt hours when in full operation.

The commencement of electricity generation marked a significant milestone on the mega-dam project. The next turbine is expected to come online in a few months. According to the dam's project manager, Kifle Horo, completion of the GERD project may take another two to three years.

In a twitter thread posted on 20 February 2022, Dr. Sileshi Bekele, Ethiopia’s chief negotiator on the GERD, said the start of power generation at the GERD was reached “in tandem with construction progress.”

According to the World Bank, Ethiopia has the second-largest electricity deficit on the continent of Africa, with less than half of the country's population having access to electricity. The GERD project is intended to alleviate this problem, and provide a steady source of electricity for the country. There are also plans to sell electricity generated from the GERD to neighbouring countries, with Kenya reportedly exploring a power purchasing agreement with Ethiopian Electric Power.

In a speech at the inauguration of the power generation, Pietro Salini, the CEO of Webuild, described ‘water’ as the ‘white oil of Ethiopia’ stating “God gave to Ethiopia a special gift. No oil, no gas—water.” Pietro Salini also pointed out that the project was in line with the sustainable development goals of the United Nations.

The GERD project has caused diplomatic tension between Ethiopia and its neighbours downstream of the Nile, Egypt and Sudan. Sudan voiced concerns that the filling of the GERD reservoir would impact the efficiency of its own 280 megawatts Roseires Dam. Egypt echoed similar concerns regarding its 2,100 megawatts High Aswan Dam (HAD), which is currently Africa’s largest hydropower facility. Negotiations between the countries brokered by the African Union have not yet produced a final agreement on the dam’s filling and operations.