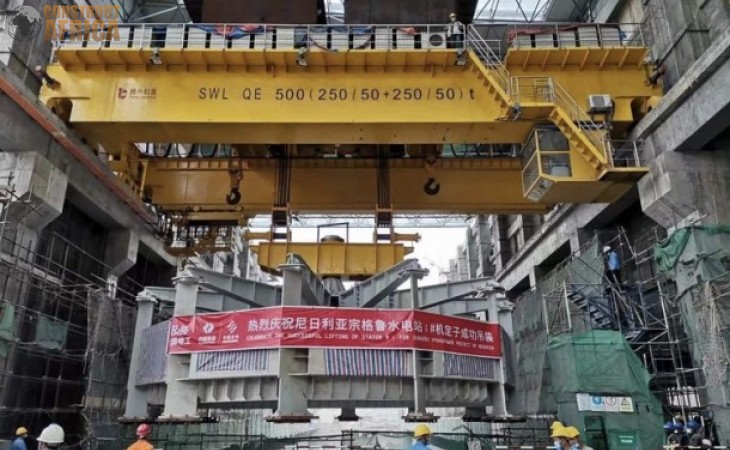 Construction work at the Zungeru hydropower plant in Nigeria is on track for commissioning to commence before the end of first quarter 2022.

The Zungeru hydropower project is a 700 megawatts facility being constructed across the Kaduna River, near the town of Zungeru, in Niger State, in northwestern Nigeria.

Construction works on the hydroelectric power plant started in May 2013, and was initially scheduled to be completed within 60 months. However, the project faced legal and financial challenges related to ecological settlement in the affected area, which caused delays to the completion of the project.

The scope of work for the project includes a Zungeru hydropower project include a 2,400m roller-compacted concrete (RCC) gravity feed dam, with a height of 101 metres and a length of 233 metres, forming a reservoir capable of storing 10.4 billion m3 of water. The project also includes an underground powerhouse located behind the RCC dam, a tailrace channel, and two switchyards on both banks of the river. The underground powerhouse of the facility will be equipped with four hydro turbine and generator units rated 175MW each.

On completion, the Zungeru power station will have a capacity of 700 megawatts and an annual production of 2,630 GWh, becoming the second largest hydroelectric facility in Nigeria after the 760 megawatts Kainji hydroelectric plant.

The project is estimated to cost US$1.3 billion. 25% of the funding for the project is being provided by the Federal Government of Nigeria, and the remaining 75% is being financed through a loan from the Export-Import Bank (Exim Bank) of China.

The hydroelectric facility is being developed by Nigeria's Federal Ministry of Power and Steel, who are the owner and implementing authority for the project.

The project is being constructed by a consortium consisting of China National Electric Engineering Company (CNEEC) and Sinohydro, a subsidiary of Power Construction Corporation of China (PowerChina), under an engineering, procurement, and construction (EPC) contract.

Kunming Survey and Design Institute, a subsidiary of China Hydropower Engineering Consulting Group (CHECG), is providing design and technical services on the project. Global Legend Integrated Concept Company, a professional service provider based in Nigeria, was engaged for the relocation of communities from the areas affected by the project.

The project was reported to be 95% complete in December 2021.

I am excited to announce that we will be injecting about 700MW of electricity into the National grid by December 2021 from the Zungeru Plant barring any unforseen developments. pic.twitter.com/q9l0jsH15K

The 2,630 GWh of electricity expected to be generated annually from the Zungeru hydroelectric plant, which will meet at least 10% of Nigeria’s total domestic energy needs. The hydropower facility will also help in flood control, irrigation, water supply as well as fish breeding facilities. Construction of the power plant has also provided direct and indirect employment to at least 2000 people.

The Nigerian government is planning to concession the operations of the 700 megawatts Zungeru hydroelectric plant. In March 2021, the National Council on Privatisation (NCP) and the Bureau of Public Enterprises (BPE) invited expressions of interest from qualified technical advisers to provide transaction advisory services for the award of a concession for the Zungeru hydroelectric plant.

Top Photo: Installation of stator for Generator No. 1 at the Zungeru Hydroelectric plant on 18 April 2021 (@Jakepor21 Twitter Handle)