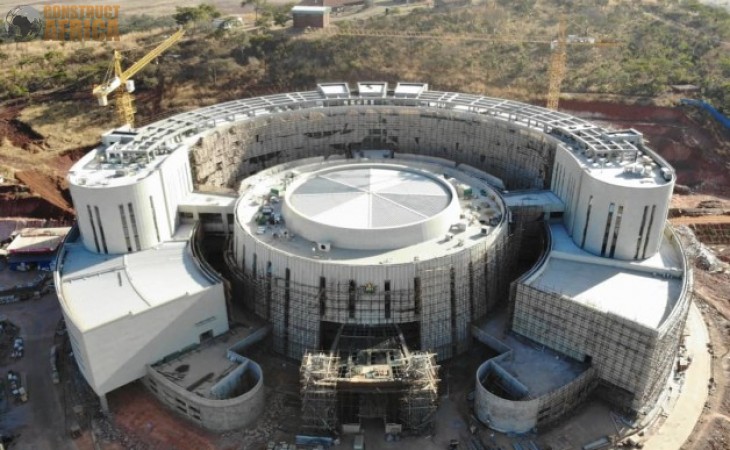 The project was reported to be 95% last month (March, 2022). At that time, construction works were ongoing on two unfinished floors. An 800-car parking lot will also be constructed after the main building is completed.

Addressing the media on Tuesday 5 April 2022, Zimbabwe's Local Government and Public Works Minister, Mr. July Moyo, said, “The inside of the building is complete, they are now finalizing the exterior. After that, we will have validation teams from China this month and next month to work with our local team and then we are sure everything is done.”

Speaking during a progress inspection of the project in March 2022, the Permanent Secretary in Zimbabwe's Ministry of Local Government and Public Works, Mr. Zvinechimwe Churu, stated that the project was originally scheduled for completion in 32 months and be finished by July 2021. However, the project was delayed due to the Covid-19 pandemic according to Mr. Churu.

“The project’s primary buildings will be finished by the end of this month. Except for the car park area, we estimate the civil works around the building to be completed by the end of April. While the contractor is still working in that location, we allow them time to mobilize and remove their equipment. When that is completed, the parking lot will be built,” explained Mr Churu.

Zimbabwe’s new Parliament Building will be ready for commissioning soon… the contractors are now working on the interior finishes & it’s all exquisite… pic.twitter.com/K0gqs9MXfB

Zimbabwe's new parliament building is being constructed on an area of 50,000 square metres in Mount Hampden,18 kilometres northwest of its capital, Harare. The building will have a gross floor area of  approximately 33,000 square metres of office space.

The project is being funded through a grant provided by the Chinese Government.

On completion, the new parliament building will house both the upper and lower houses of the Zimbabwean Parliament, and will consist of six floors arranged in concentric circles around a central parliamentary chamber. The parliamentary chambers will accommodate up to 650 legislators, their offices, conference rooms and meeting spaces.

The new building will replace the 100 seats, colonial-era parliament building, built in the late 19th century, which is now too small to accommodate all the 350 parliamentarians and staff.