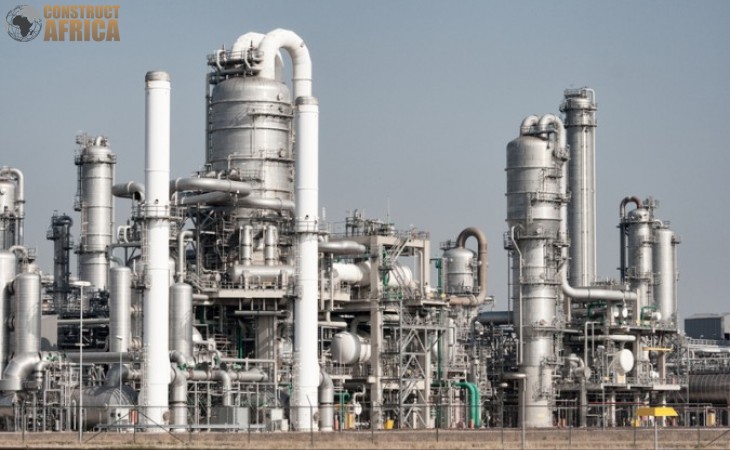 The Dangote refinery site is located on a 2,635 hectares site in the Lekki Free Zone, Lagos State, Nigeria.

On completion the refinery will have the capacity to process 650,000 barrels of crude oil daily. It is expected to be Africa’s biggest oil refinery and the world’s largest single-train facility.

The refinery includes a 440 million litre water treatment tank farm and a housing estate built for 50,000 staff and their families onsite.

In January (2022), Akinwumi Adesina, President of the African Development Bank (AfDB), toured the Dangote oil refinery and petrochemical plant. Back in 2014, AfDB had provided a US$300 million loan for the construction of the refinery and fertilizer manufacturing plant. The two facilities will create 38,000 jobs during the construction phase.

Speaking during Adesina's visit to the site, Dangote said “We appreciate the support of the Nigerian government, our lenders, and development finance institutions like the African Development Bank, without whom we would not have come this far. We have enjoyed a good working relationship with the Bank and this visit further encourages us.”

Dangote further stated that “Mechanical work on the refinery is complete and hopefully before the end of third quarter we should be in the market," and that ''The plant will start with a processing capacity of 540,000 barrels per day. Full production can start maybe, by the end of the year or beginning of 2023.''

Dangote Refinery and Petrochemical Industrial Zone employs 38,000 people: 11,000 expatriates and 27,000 Nigerians. The impact of industrialization is massive. It delivers quality jobs for the youth. Let’s do more to drive industrialization in Africa! ⁦@Macky_Sall⁩ pic.twitter.com/vxBaM5RrhY

The successful completion of the refinery project is expected to have a significant impact on Nigeria's foreign exchange through import substitution and substantial savings in earnings.

The refinery will meet Nigeria’s need for refined products completely in addition to which there will be a surplus for export. Following the completion of the refinery, it is estimated that by 2023, Nigeria will import zero petroleum oil products – down from approximately $50 billion current oil product imports per year.

Adesina and Dangote discussed the potential of collaboration between the African Development Bank and Dangote Industries Limited to expand business to other African countries. Possible collaboration could include the establishment of an African industrial manufacturing corps made up of engineers and other technicians who constructed the refinery. Adesina said this would be invaluable for skills sharing across the continent.

In August 2021, Nigeria’s Federal Executive Council (FEC) approved the acquisition of 20% minority stake in the project by state-owned Nigerian National Petroleum Corporation (NNPC) for US$2.76 billion. NNPC will also supply 300,000 barrels per day of crude oil to the refinery.

All Nigeria’s oil refineries are currently shut down, which adds further pressure on gasoline imports and costs the government a huge amount in subsidies.