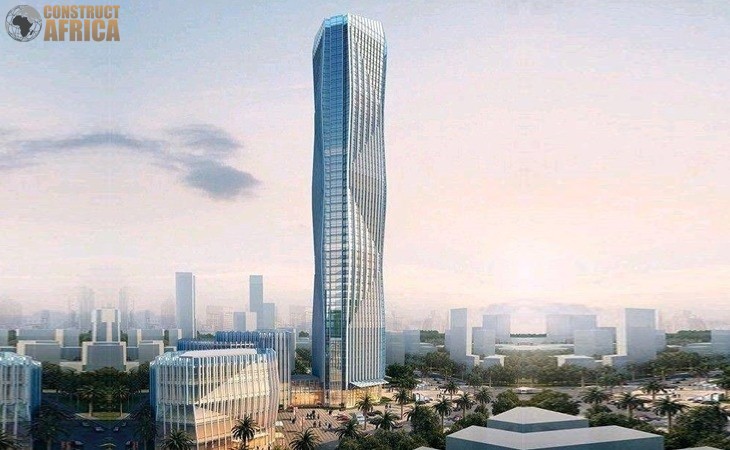 Construction of Tallest Building in East Africa Completed in Ethiopia

The Commercial Bank of Ethiopia headquarters (CBE Tower) is now the tallest building in Ethiopia, and in east Africa.

The CBE Tower is 209 metres tall with 53 stories. The building is located on a 165,476 square metre area of land along Yohanis Street in Addis Ababa. The tower complex is a multi-use building with eight conference halls, commercial centres, a sightseeing tower, an exhibition area, as well as public facilities such as restaurants, a shopping mall, a cinema, and a gym and spa.

The 53-storey tower also functions as the headquarters of the Commercial Bank of Ethiopia, reported to be Ethiopia's largest bank. The CBE Tower was inaugurated on February 13 2022 by Abiy Ahmed, Ethiopia’s Prime Minister.

The building was designed by German architectural firm, Benn. The structure of the main tower features diamond facets and has a total of 5,208 tower curtain wall panels. Each diamond facet has different inclination angles and dimensions, giving the building exterior an exquisite "diamond coat" look.

Construction of the CBE Tower commenced in 2015 and was originally scheduled for completion in 2019. It was eventually completed in February 2022. The tower complex was constructed by Chinese contractor, China State Construction Engineering Corporation (CSCEC). The scope of work involved the construction of two five-story podiums and the main tower.

The CBE Tower project is reported to have cost 5.3 billion Ethiopian Birrs (US$303.5 million).

Before the completion of the CBE Tower in Addis Ababa, the Britam Tower in Nairobi, Kenya, was the tallest building in east Africa, with a height of 195 metres.

The inauguration of the CBE Tower coincided with the Commercial Bank of Ethiopia’s 80th anniversary. In attendance at the inauguration ceremony were senior Ethiopian government officials, Chinese diplomats in Ethiopia and representatives of the CBE and CSCEC.

Speaking at the inauguration, Ethiopian Prime Minister Abiy Ahmed congratulated CBE for completing the construction of the Bank and sustaining CBE as the strongest financial institution in the country for the past 80 years. “It is delighting to see that CBE, on its 80th anniversary completed this state-of-the-art building” said Prime Minister Abiy Ahmed. The Prime Minister further stated that CBE reflected Ethiopia’s constant dedication to establishing modern institutions. He also stressed the importance of modernizing the banking sector.

Also speaking during the inauguration, the CBE President, Abie Sano, stated that the building has applied very modern and latest technologies with supervision from the Addis Ababa University Institute of Technology. Mr. Sano said the construction of the CBE Tower "witnessed crucial technology and experience-sharing endeavor over the course of its construction" and served as a means for Ethiopian engineering students as well as construction companies to learn state-of-the-art technologies.

"I was very lucky to have this invaluable learning experience since the project's early construction stage," said Belay Bitew, a young Ethiopian civil engineer involved in overseeing the project construction - according to an article posted on the website of China's Xinhua News Agency.

By: hanna
what Breakthrough(s) this construction made in the history of Ethiopian Construction Industry challenges the project/design overcame and new technologies it introduced.
Sun, 01/15/2023 - 15:57