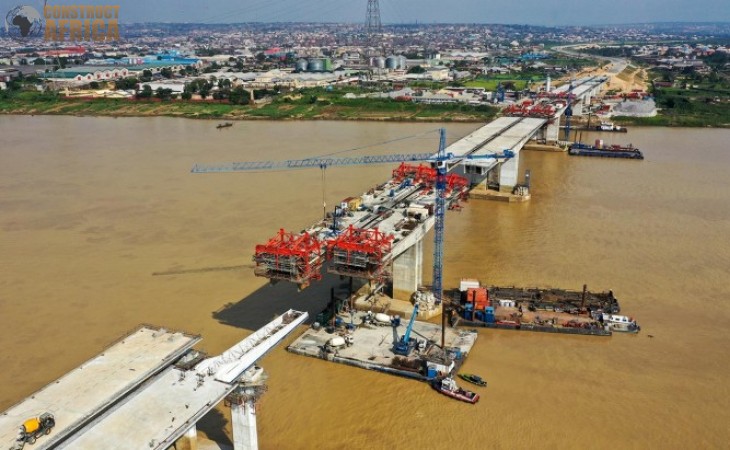 The Second River Niger Bridge, spanning from Asaba to Onitsha in Nigeria, was reported to be 91% complete in March (2022).

The 91% completion status of the bridge project was disclosed by Nigeria's Federal Minister for Works and Housing, Mr. Babatunde Fashola, on Thursday 24 March 2022 during the weekly ministerial briefing at the State House, Abuja.

The bridge, which is being constructed across the River Niger in Nigeria, is a Nigerian Federal Government project that involves the construction of a total length of 11.9 kilometres of road structures, including a 1.6-kilometre tolled concrete box-girder bridge with two superstructures. The bridge works also includes a six-lane 10.3-kilometre approach highway, an interchange at Owerri and a 15-booth toll station at Obosi city.

The project is being funded through the Presidential Infrastructure Development Fund (PIDF). The PIDF was created by the administration of Nigeria's President Muhammadu Buhari in May 2018 for the specific purpose of investing in critical road and power projects across the country, and is managed by the Nigerian Sovereign Investment Authority (NSIA).

Construction works for the Second River Niger Bridge is being carried out by Julius Berger, a Nigerian construction company that has been involved in the construction of major industrial and civil infrastructure projects in Nigeria since 1965.

The existing bridge across the River Niger was commissioned in 1965. The bridge forms part of a major road connection between Asaba on the west bank and Onitsha on the east bank and is part of the Trans-African Highway from Lagos in Nigeria to Mombasa in Kenya. It is also the main east-west connection within Nigeria.

During an inspection tour of the project on 8 March 2022, a government delegation walked the entire length of the bridge from Onitsha to the Asaba end. The delegation also examined the Owerri interchange which was about 87% complete.

The 4th photo is the 15-booth Toll Plaza. pic.twitter.com/kPsKdtMU0Z

Speaking during the inspection of the bridge project, Professor Gambari confirmed that the project will be completed and commissioned before the end of this year (2022).

Nigeria's Minister of Finance, Mrs. Zainab Ahmed, also paid an inspection visit to the project site on Saturday, 2 April 2022, during which she witnessed the final concrete pour on the bridge and the linking of the two ends of the bridge.

Hon. Minister of Finance, Budget & National Planning, Mrs Z. Ahmed, overseeing the final concrete pour at axis 290 North during the inspection of the 2nd Niger Bridge project. The Board of @nsia_nigeria led by the chairman witnessed the final stage @toluogunlesi @ pic.twitter.com/DuwLXAzPYS

Adeyemo Ajani, Federal Controller of Works in Anambra State, stated that the project had created 5,500 job opportunities for Nigerians. “At the peak of the construction of this project, we had over 1500 staff employed locally from here. This is related to direct employment. And when you look at indirect employment, such as the vendors, suppliers and others, over 4,000 persons were engaged for this construction,” he said.