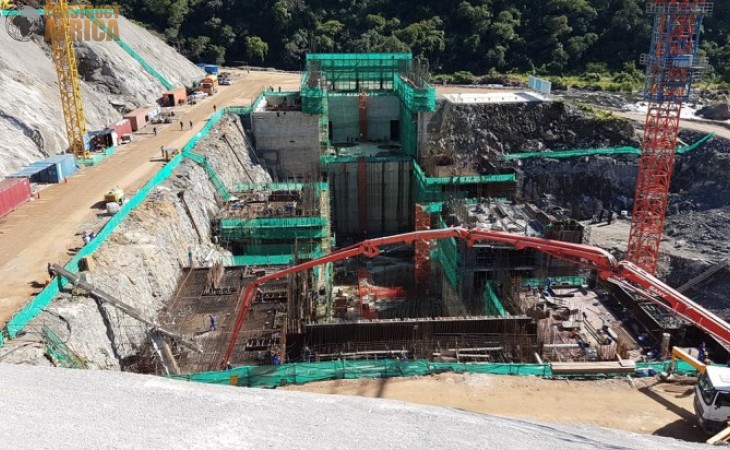 The Kafue Gorge Lower Power Station (KGL) is a 750 megawatts hydroelectric power station under construction in Zambia. The site of the power plant is located on the Kafue River in the southern Chikankata district, 90 kilometres from Lusaka, the capital and Zambia's largest city.

The hydroelectric facility is being developed by the Zambia state-owned power company, ZESCO, who are the owner and implementing authority for the project.

The scope of work for the project includes the construction of a 139-metre-high concrete-face rockfill dam with a crest width between 8 and 10 metres and a length of 378 metres. A surface powerhouse with a width of 44.5 metres, a height of 58 metres, and a length of 127 metres will be housing five 150-megawatt generator units.

Construction works on the hydropower plant started in November 2015. In September 2019, construction of the dam and power station were halted due to financial difficulties. In July 2021, one of the five turbines (Turbine Number 2) was commercially commissioned to supply 150 megawatts to the Zambian national grid.

The Zambian President, Hakainde Hichilema, conducted a tour of the project on July 21, 2022.

On completion, the KGL power station will be the third largest hydropower station in the country. The project is being funded through a public-private partnership (PPP) model, and is Zambia’s first major investment under the PPP model.

The project is estimated to cost US$2 billion, which includes engineering, procurement, and construction costs of US$1.58 billion, financing at US$43 million, insurance at US$100 million, and capitalised interest at US$312 million.

The Zambian Government is reported to be funding 15% of the project costs, while the remaining 85% is being funded by the Exim Bank of China and the Industrial and Commercial Bank of China.

The dam’s floodgate will have five 400-metre-long penstocks. The main feature of the left bank will be a 980-metre-long diversion tunnel with a horse-shoe cross-section of 10 metres x 14 metres.

The generated electricity will be transmitted through a 330-volt switchyard with provision for two outgoing transmission lines, each going to a new and existing 330/132 kilovolt substation. There will also be a provision for a short interconnector to the existing Kafue Gorge Upper power station and five incoming feeder bays.

An engineering, procurement, and construction (EPC) contract for the project was awarded to Sinohydro Corporation in October 2015. CPCS Transcom was appointed as the lead advisor for all transaction advisory services.

The latest project update reports four of the five generators commissioned, with the fifth expected by the end of 2022.

On completion, the KGL power station is expected to meet Zambia’s power deficit and ensure a reliable and stable power supply in the country.