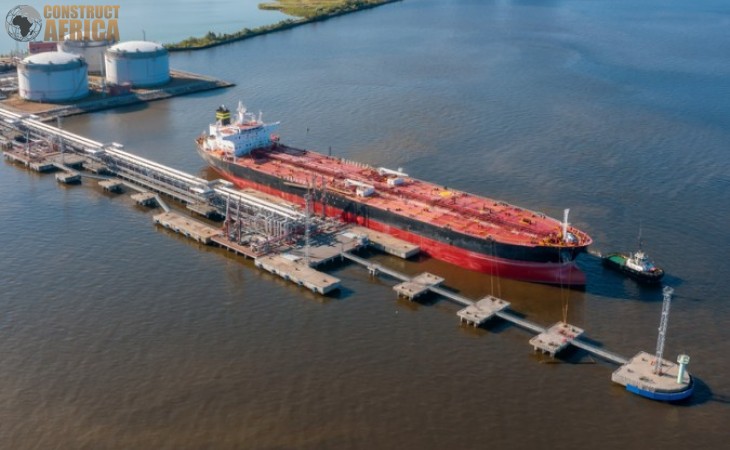 The new facility is all set for a dry run test in March.

The old terminal was built in 1963 to serve the then East Africa Oil Refinery, which later became the Kenya Petroleum Refineries Limited. The new oil terminal is an off-shore facility situated exactly opposite the existing Kipevu Oil Terminal.

The new Kipevu Oil Terminal is reported to be the largest of its kind in Africa.

Construction of the new terminal began in 2019, and was scheduled to complete by August 2021. However, the project was delayed due to the Covid-19 pandemic. “Delivery of material used in the construction was affected and the site was closed for several weeks when the pandemic struck. We are however making progress,” KPA said in May 2021.

The new terminal is reported to have cost Ksh40 billion (US$385 million). The facility consists of an offshore island terminal with four berths and a total length of 770 metres along with one workboat wharf located in the Westmont area which will be used for landing facilities. It will be able to handle up to four vessels at a time. The old terminal can only handle one vessel at a time.

The new Kipevu Oil Terminal also has five subsea pipelines which are buried 26 metres under the seabed, and which will allow for dredging the channel in the future without any disturbance to the pipes.

The completed new oil terminal facility will have the capacity to load and unload vessels of up to 200,000 DWT (dead-weight tonnage). The new terminal will also be able to handle five different fuel products. These include crude oil, heavy fuel oil and three types of white oil products (DPK-aviation fuel, AGO-Diesel and PMS-Petrol). It will also have a fitted Liquefied Petroleum Gas (LPG) facility.

Risers for each oil product will connect the terminal to the Kenya Petroleum Refineries Limited (KPRL) and Kenya Pipeline Company (KPC) storage tanks at Kipevu.

Initially, the terminal will be able to accommodate three ships simultaneously. There will be a fourth provisionally constructed berth that will have facilities that match demand and will also be able to handle a fourth ship.

The offshore facility built by China Communication Construction Co., and financed by Kenya Ports authority is in the final stages of completion. pic.twitter.com/GgcbypfzgP

President Kenyatta noted that, when operational, the new offshore jetty will save the country in excess of Ksh2 billion annually in demurrage costs incurred by oil shippers thereby contributing to a significant reduction in fuel pump prices.

Kenya will be able to double its capacity to handle transit petroleum products to Uganda, Rwanda and Burundi. The current capacity stands at 35,000 tonnes. The new facility will ensure a reduction in petroleum product price by reducing demurrage cost or time taken to load/unload cargo.

It will also be able to handle vessels up to a deadweight tonnage of 200,000 and has an LPG line to provide a continuous gas supply to Kenya. Faster loading will ensure lower LPG prices. Once operational, the Kenya Pipeline Company (KPC) estimates that the project facility will be able to reduce gas costs by 30%.

The new terminal will be faster and more modern and will reduce vessel turnaround time from four days to two days.

“The construction of the KOT (Kipevu Oil Terminal) to support the energy sector has made significant progress and upon completion by the end of this year, we shall have terminals consisting of four berths capable of berthing four vessels to benefit from economies of scale and reduce the fee charged for waiting vessels,’ said acting KPA managing director John Mwangemi.