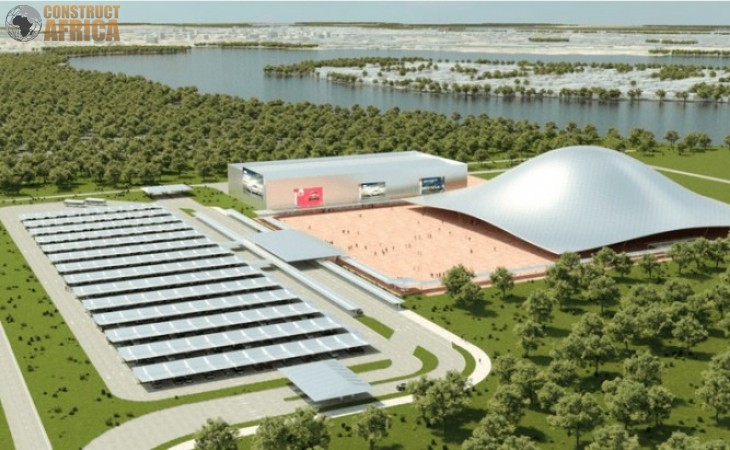 PFO Africa, the designer and builder of the Abidjan Exhibition Centre (Parc des Expositions) in Ivory Coast, has awarded BESIX a contract to build the structure and roof cladding of the Palais des Congrès.

The works, which began in June 2021, includes the design, manufacture, transport and installation of a three-dimensional metal structure 37 metres high. BESIX is also carrying out the concrete shell and the installation of the roof.

An ambitious structure designed by the architect Pierre Fakhoury, the Palais des Congrès will have a surface area of 12,000 m² and a capacity of 10,000 people. It will host trade fairs, cultural and sporting events and international conferences.

Mathieu Dechamps, General Manager of BESIX International said “BESIX is very proud to participate in the construction of the Abidjan Exhibition Centre, a project which will further strengthen the central position of Ivory Coast in the heart of West Africa. This is our third project in the country at the initiative of PFO Africa, the leading construction company in Ivory Coast, and I would like to thank them for their trust and the quality of the relationship we have built up over the last few years. Together we have built one of the largest drinking water treatment plants in the region, in La Mé, to serve the greater Abidjan area, and we have started work on the F Tower in Abidjan, designed by Pierre Fakhoury, which will be Africa's tallest tower. The Palais des Congrès is an equally exceptional project, which we are looking forward to completing and which will make a significant contribution to the influence of Ivory Coast.”

BESIX is a Belgian company, based in Brussels and active in 25 countries and 5 continents in the construction, real estate development and concessions sectors. Its iconic achievements include the Burj Khalifa, the world's tallest tower in Dubai. On the African continent, in addition to its projects in Ivory Coast, BESIX is currently contributing to the construction of the Grand Egyptian Museum (Egypt), the largest museum in the world dedicated to a single civilization, the Mohammed VI Tower (Morocco) and the Nachtigal hydroelectric project (Cameroon), which will produce a third of Cameroon's electricity.